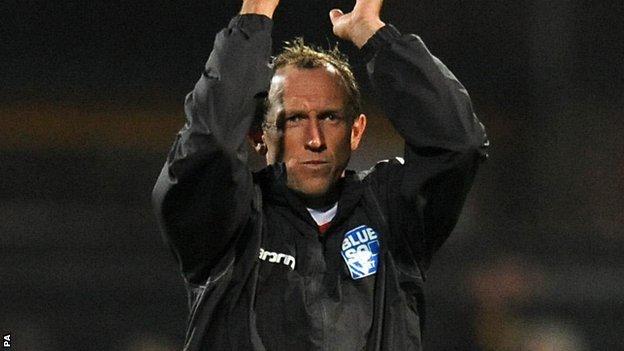 Andy Morrell has warned his Wrexham side "have plenty to work on" as the Conference promotion chasers broke a club record of 90 points in a season.

Wrexham were held 1-1 at Cambridge on Saturday, the third time they had dropped points in four games, and trail leaders Fleetwood by eight points.

Robert Ogleby's injury-time equaliser saved the Welsh side a point as the second-placed team slipped up again.

"Especially as we achieved it by the end of March and still have games left.

"But we need to get back to being the team that got us that 90 points because the one against Cambridge was a scrappy one.

"There is plenty to work on, we've got to go back to the drawing board."

Wrexham face the other two top three sides in their next four games - visiting top-of-the-table Fleetwood next Tuesday and Mansfield later this month.

The Dragons had led the Blue Square Bet Premier table until January but Fleetwood's incredible unbeaten run stretching back to 11 October has ensured they are now favourites for the title and one automatic promotion spot to the Football League.

Cambridge dominated against Wrexham at The Abbey Stadium but Tom Shaw's strike was cancelled out by Wales under-21 striker Ogleby late on.

But manager Morrell insists his Wrexham side are still in the title race despite being eight points behind Fleetwood with just six games remaining.

"There is 18 points to play for and that's a lot so we just have to keep going.

"It is out of our hands and is up to other people to do us a favour.

"We didn't really deserve to win the game. That late goal might be important but we needed to win and it took the goal to spark us into life.

"We had two minutes of testing them out and that is not good enough in a 90-minute game.

"We didn't have any shots of any note and for a team that has 90 points, it is not good enough.

"The players have said we've got to be better - and if we're better, then we have every chance."