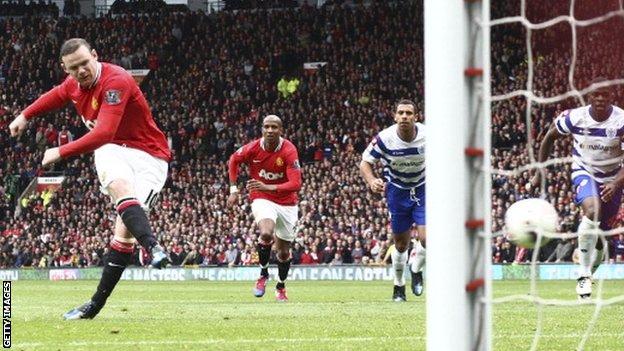 Manchester United went eight points clear at the top of the Premier League after a controversial Wayne Rooney penalty helped them defeat QPR.

Paul Scholes also scored from 25 yards as United secured an eighth straight league win, while Michael Carrick was denied by a post.

QPR's Shaun Derry was harshly sent off for fouling Ashley Young, who was offside, before Rooney fired home.

But United were the better side, 37-year-old Scholes sealing victory.

Despite the controversy surrounding the first goal, United appear to be in unstoppable form as they race towards a record 20th top-flight crown.

They have secured 34 of the last 36 points available and their next two games are away to Wigan, who have failed to take a point off Sir Alex Ferguson's side in 13 league meetings, and at home to Aston Villa, who have won one of their last nine league games.

All in all, it is going to require a demise of epic proportions to prevent Ferguson from getting his hands on the 13th league title of his Old Trafford reign.

QPR manager Mark Hughes had told his players to go out and 'enjoy' themselves as there were no expectations on them. Yet they were under pressure from the first minute to the last.

Sir Alex Ferguson has now won 52 out of 70 Premier League games against one of his former players. He is unbeaten in his last 30 Premier League matches against them, since a 4-3 defeat at Mark Hughes's Blackburn in February 2006.

United peppered the visitors' goal with in excess of 20 attempts as Hughes, who won two titles as a player at Old Trafford, endured a miserable return to his former club.

Paddy Kenny had already denied Rooney from a free-kick when the United striker fired his side ahead from the penalty spot after Derry, the captain, was harshly dismissed for a 14th-minute challenge on Young, who was clearly in an offside position.

It was a huge call by referee Lee Mason, Young going down after Derry made contact with the England international, and left the visitors, now without a Premier League clean sheet in 23 outings, with 10 men for more than 75 minutes.

They might have been fortunate to take the lead but no-one watching could deny that United were better than their struggling opponents.

QPR deserve credit for the way they battled on after falling a man down but Young, who was unmarked and eight yards out, spurned a fine chance to double the lead after Rooney's 23rd-minute pin-point cross.

The relegation-threatened Londoners deliberately left midfielder Joey Barton, who is on nine bookings, out ahead of Wednesday's must-win home game with Swansea.

Yet a mistake by Rafael da Silva almost allowed Adel Taarabt a chance to score, Jonny Evans making a vital block to deny QPR an equaliser.

At the other end Rafael saw his low effort hit Kenny before deflecting on to the woodwork and rebounding to safety before Scholes made sure of the points with his third goal since coming out of retirement.

Again Rafael was involved, the Brazilian laying the ball into the midfielder's path before the former England international found the target with a perfectly executed low drive from outside the area beyond the despairing Kenny in the 68th minute.

Michael Carrick was denied by the woodwork as United finished strongly, QPR avoiding a heavy defeat which would have sent them into the bottom three on goal difference.