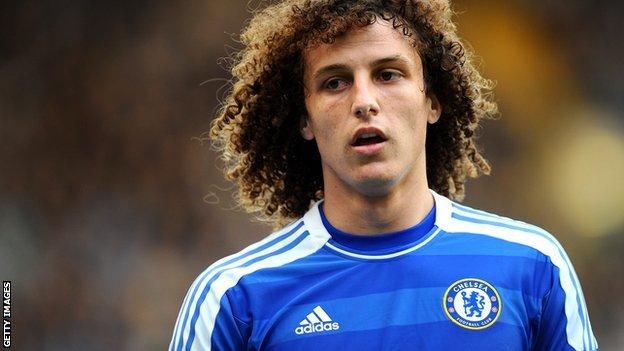 The Brazilian was forced from the pitch a minute before half-time during Saturday's 4-2 win at Aston Villa.

After the game, interim Chelsea manager Roberto Di Matteo confirmed Luiz's ankle will be examined by the club's medical staff next week.

24-year-old Luiz, who joined Chelsea from Benfica just over a year ago, has formed an increasingly effective defensive pairing with club captain John Terry in recent weeks. The Blues have conceded just two goals in their last three games.

"He felt his ankle ligaments and came off," Di Matteo explained.

Luiz's replacement for the European fixture on Wednesday night could be England international Gary Cahill, himself a relatively recent recruit from Bolton, and a substitute in Birmingham on Saturday.

Di Matteo was also keen to praise the recent form of striker Fernando Torres. Having gone 24 games without a goal, the Spaniard netted in the FA Cup win over Leicester earlier in the month.

He also provided the assist for Salomon Kalou in the Champions League quarter-final first leg in Portugal, before scoring again on Saturday at Villa Park.

"He had a couple of chances in the first half as well, and he took his goal well," said Di Matteo.

"All around it was a fantastic team effort and he's a team member who works hard for them, and today he scored as well so we're very happy."

Chelsea sit fifth in the Premier League table, just two points behind Tottenham albeit having played a game more.

The chance of snatching a Champions League qualification spot in the final seven games of the Premier League season drives Di Matteo and his Chelsea side.

"It's crucial for us," the temporary boss admitted, who also emphasised the need to build upon Saturday's victory.

"We can only try and win our games, and we did today."