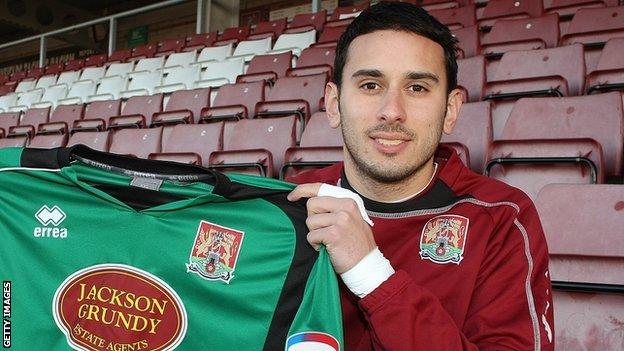 Northampton Town goalkeeper Neal Kitson says he is grateful for the support of his manager and team-mates in making a successful debut for the club.

The 26-year-old saved a penalty in the 1-1 draw at Crewe Alexandra.

Kitson told BBC Northampton: "This is my first first-team game in England [when] I've actually been able to show what I can do.

"The gaffer has believed in me, the team were behind me and it was a collective effort."

"I felt there was going to be a penalty today," added Kitson.

People were worried when Matt Duke left, but they don't need to worry any more

"I enjoy them. I read his eyes, went the right way and luckily enough it hit me."

American Kitson signed a deal until the end of the season in January, having previously played for Rochester Rhinos.

"I've always wanted to play in England and my family is from Sheffield.

"As soon as I had an opportunity to be here, I was on a plane. This country is the top place to play if you're a professional footballer.

"There's a couple of players who've come over [from the USA] and done well, and hopefully I can add my name to that list."

Cobblers manager Aidy Boothroyd believes that Kitson can be a perfect replacement for Matt Duke, who returned to parent club Bradford after their first-choice goalkeeper Jon McLaughlin was sent off against Crawley on Tuesday.

"People were worried when Matt left, but they don't need to worry any more," Boothroyd told BBC Northampton.

"I knew all along Neal would be terrific and he's done really well."

"I knew that he wouldn't let us down. I got to know him from my time in America through a third party who's recommended him.

"He's got a contract until the end of the season to prove himself."