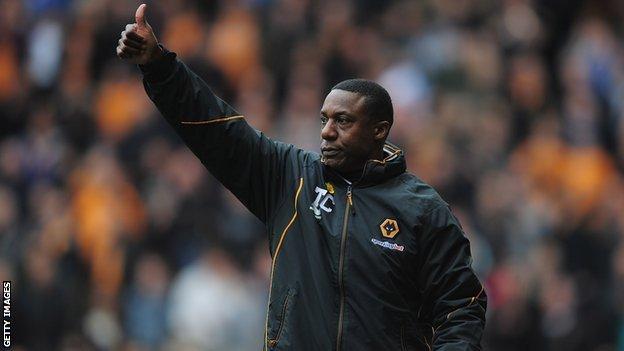 Connor claimed Martin Petrov's hotly-disputed penalty in the 3-2 defeat to Bolton turned the course of the game.

He also defended Roger Johnson and keeper Wayne Hennessey after the pair rowed on the pitch.

Connor said: "I am not giving up hope on anything. For me it was a very dubious penalty."

Wolves are running out of time to save themselves.

Of their remaining seven games, two are at home to Arsenal on 11 April and Manchester City on 22 April, while they still have to visit Sunderland on 14 April and Swansea on 28 April.

The fear is their fate could already be decided before the final match of the season away to fellow strugglers Wigan on 13 May.

I don't like to see this in public but told them that we would go out and be united in what we were trying to do to win the game, which we did

"People can say what they want to say about us being relegated now but there are still 21 points to play for and I am not giving up hope on anything until such time as it might be impossible for us to stay up," added Connor.

And Connor believes the outcome hinged on referee Jonathan Moss's decision to award a penalty after Bolton's Mark Davies went down under Johnson's challenge.

He said: "The Bolton players did not appeal with any great gusto and it had a massive effect on the game.

"I don't feel it was the correct decision and gave Bolton something when, for the first hour, they had had nothing because we dominated and played so well."

Connor revealed he spoke to Johnson and Hennessey about their disagreement at half-time, saying: "It was two players showing passion and determination to get the right result for Wolverhampton Wanderers.

"They spoke and I spoke to them at half-time and they shook hands and went out and played in exactly the same vein in the second half.

"I don't like to see this in public but told them that we would go out and be united in what we were trying to do to win the game, which we did."

Bolton manager Owen Coyle was delighted with a "massive three points" after their third successive league win, and insisted: "It was a penalty - our lads have told me it was a penalty as well. There is no issue with that.

"People talk about 'six pointers' and we have got nine points from our last three league games that have been against teams around us in QPR, Blackburn and Wolves.