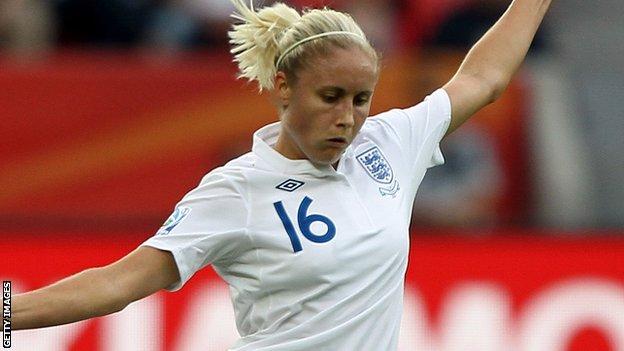 Unitt was on target during a first half that saw Group 6's bottom team blown away in a five-goal rout.

Houghton completed the rout with the sixth goal in the 68th minute.

Unitt's club colleague Karen Carney was the main architect in place of the injured Kelly Smith.

Williams provided the assist for Arsenal striker White to add goal number four in the 35th minute, then Carney crossed for Arsenal central defender Houghton to score seconds before half-time.

Carney and Everton midfielder Fara Williams, both on yellow cards from previous group games, were substituted at half time as a precautionary measure as another booking for either would have ruled them out of June's key qualifier against Netherlands.

England were never as assertive without their two most creative players in the second half, but several chances went begging either side of Houghton adding her second.

Victory took England to within two points of group leaders Netherlands and a win over the Dutch in June would virtually assure them of a place at Euro 2013, to be staged in Sweden.

Powell said: "We can focus on Holland now and I recognise that that's the big game in the group.

"But today was a must-win game to keep us in contention and we got the result, although we only played well in patches.

"I would have taken six goals before the game, but it should have been 12. The result was the most important thing though, so I'm more than satisfied."