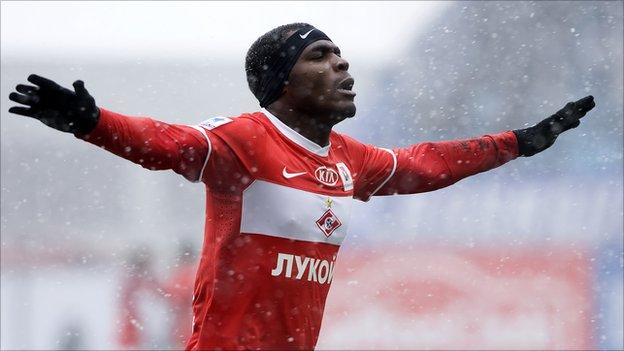 Spartak Moscow's Emmanuel Emenike has been fined US$17,000 for an offensive gesture towards Dynamo Moscow fans who racially abused him in a Russian league match.

The Nigerian also received a suspended sentence until the end of the season for his actions during Sunday's derby, which Spartak won 3-1.

"We decided it was an adequate punishment," said Vladimir Vasilyev, a Russian FA's ethics committee official.

"I have to agree that Emenike did something that he should not have done," the former Russia international told reporters.

"But at the same time I couldn't follow logic in the FA's decision as they didn't take any action against the Dynamo fans who had racially abused Emenike," he said.

"I'm glad they didn't ban Emenike, otherwise it would have looked like an outright racial discrimination."

Emenike said "he was sorry he could not hold back his temper" towards Dynamo fans, who were making monkey noises when the Nigeria international touched the ball.

The Russian FA (RFU) did not punish the club for the racist chanting, although Spartak and Dynamo were fined $6,800 and $680 respectively for their fans throwing snow balls at the players.

Spartak received a bigger fine because one of the snow balls hit a Dynamo player.

The Emenike case was the latest in a series of racist incidents in the Russian Premier League.

Earlier this month, a banana was thrown at Anzhi Makhachkala's Congolese defender Christopher Samba in a match at Lokomotiv Moscow.

Another Anzhi player, Brazilian full back Roberto Carlos, had bananas thrown at him at stadiums in St Petersburg and Samara last year.

Coincidently, the Russian authorities on Friday revealed the person responsible for throwing the banana at Samba.

"We had identified him, he's a college student from Moscow. We have sent his case to the police," Vasilyev said.

The RFU did not punish either club over the Samba incident.