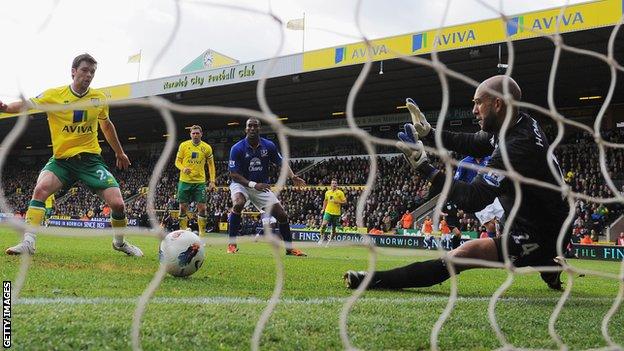 Norwich City came from behind twice to hold Everton in an entertaining encounter at Carrow Road.

Jelavic was in the right place again to convert Steven Pienaar's centre, although Norwich felt they should have had a free-kick in the build-up.

There were plenty of talking points from this match, most particularly Everton's second goal. Norwich were most unhappy that play was allowed to continue. Everton were twice in front through Nikica Jelavic, but Norwich twice equalised. It was terrific entertainment for both sets of fans. Norwich are up to 40 points and surely safety.

But Grant Holt made sure the spoils were shared with a close-range tap-in.

In a game with little riding on the result, two strikers were able to build on their burgeoning reputations.

Holt's equaliser was his 13th league goal of the season, maintaining his status as the Premier League's second-highest English scorer behind Wayne Rooney.

And Jelavic, a January signing from Rangers, continued to show he has an eye for goal south of the border with a well-taken brace, moving his Everton tally to six.

The Croatian slightly blotted his copy book late on though, hitting the floor clutching his face when it was clear that Ryan Bennett's challenge had struck him in the chest.

With an FA Cup semi-final against local rivals Liverpool looming for Everton and Norwich having all but secured Premier League safety the game had little resting on its result.

But after a sluggish opening 20 minutes the encounter finally kicked into gear with Everton's opener.

Leighton Baines was allowed the time to release Jagielka in the penalty area and his low centre was stylishly poked past John Ruddy by Jelavic.

Norwich regrouped and, after a period of sustained pressure, were level courtesy of Howson's first ever top-flight goal.

Adam Drury was handed the freedom of the left flank and fed Wes Hoolahan, who laid it across to give the former Leeds United man the simplest of finishes.

Howson was a constant threat for the home side, hitting a rasping effort into the chest of keeper Tim Howard and then forcing the American into a fine save with a sweetly hit volley.

Everton midfielder Darron Gibson has not featured in a Premier League defeat for 24 games. The last time he endured a top-flight loss was while playing for Manchester United in a 2-1 reverse to Chelsea in April 2010

At the other end Drury, in his testimonial year at Carrow Road, was sharp enough to turn the ball away from Seamus Coleman at the pack post, denying the Irishman a certain goal.

Jelavic had the visitors in front once more, tapping in Pienaar's cut back, however Norwich were adamant they should have had a free-kick for obstruction by Pienaar in the build-up, but nothing was given.

It was all square shortly afterwards. Hoolahan released substitute Aaron Wilbraham, who could only hit his effort straight at Howard. But he picked up the rebound, rolled the ball to Holt, and the skipper applied a composed finish from five yards out.

"I understand the referee's point of view. But nine out of 10 times that's a free-kick to us.

"The ball is trapped between the player's legs. Normally the referee would blow for the decision.

"We should've won the game. We were playing a right top side. I thought we were brilliant."

"It's a good point. But if you're ahead twice you're going to be disappointed you don't see it out.

"If we had been better we would have scored another on the counter.

"Jelavic has done very well for us. We've been looking for a centre-forward for a while and he fits the bill."