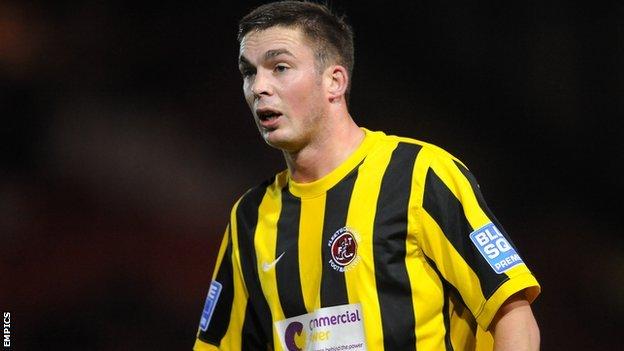 The best chance in an uneventful first half fell to the visitors when Lee Fowler's free-kick deflected off York's James Meredith and hit the crossbar.

The hosts tested the league leaders after the break but Lanre Oyebanjo and Ashley Chambers failed to find the net.

Against the run of play, Brodie dummied the ball past two defenders and struck low under keeper Michael Ingham.

The Minstermen pushed for an equaliser but Meredith's shot was cleared off the line and Matty Blair's effort ricocheted off the inside of the post late on.

Victory means that Fleetwood will win the title and promotion to the Football League if they beat second-placed Wrexham at home on Tuesday.

"As we say in football, you don't always get what you deserve and I think it's a bit hard on us today.

"I think a point would have been a big point for us - but we haven't got it.

"It's got to be taken on the chin. We've got to learn what men we are now, what we've about now.

"We're still fourth and what happens now whether it's poor performances, defeats, wins, draws, whatever - as long as we're in the top five come the end of the season it doesn't matter."