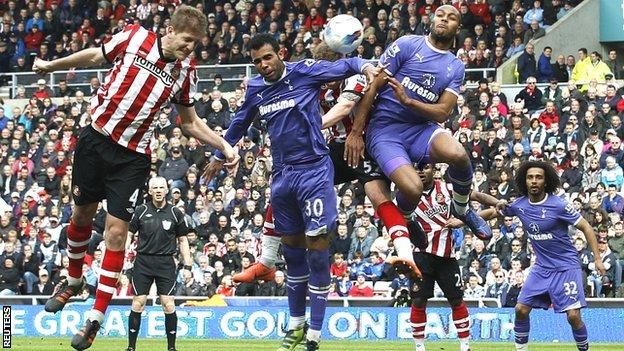 Tottenham's hopes of a top-four Premier League finish remain in the balance after a goalless draw at Sunderland.

In normal circumstances, a point at Martin O'Neill's resurgent side would be praiseworthy, but in Tottenham's position it represents a minor setback.

Spurs began the game brightly, but the home side neutralised the match, resulting in few clear-cut chances.

The best of them fell to Rafael van der Vaart, whose two goal-bound shots were blocked by Sunderland defenders.

After spending much of the season being touted as the sole opposition to a Mancunian monopoly of the title-race, Tottenham have endured a month of suggestions that their top-four challenge was crumbling.

Last week's 3-1 win over Swansea arrested a pointless five-game slump, but their inability to take all three points at the Stadium of Light leaves them with little room for error during their remaining seven-game run-in.

However, as the old adage goes, you have to capitalise when you are on top and barring a Benoit Assou-Ekotto 20-yard strike that flew past the far post and a Luka Modric shot on the turn, home keeper Simon Mignolet was not tested.

Sunderland are a tough proposition under Martin O'Neill, particularly at home, where they had lost only one in eight heading into this game. Only Manchester United and Manchester City have earned more points in games since the Northern Irishman's appointment.

The Black Cats rallied, got a better grip on the movement of the Spurs midfield and, from then on, there was little to choose between the teams in an 80-minute war of attrition.

As the team in greater need of a win, Tottenham were more proactive, but they were unable to break down the home side.

Van der Vaart saw a decent chance blocked by Matt Kilgallon and then an even better one by Michael Turner, possibly with his arm, before Gareth Bale headed onto the roof of the net.

"Both managers might reflect that this was a good point. It wasn't a great game with very few chances. Spurs tried to inject some urgency just as Sunderland tried to take it away. The best chances fell to Spurs but in truth this was not a thriller."

Sunderland could have snatched something on the break, but Spurs defender Kyle Walker prevented James McClean from converting a Sebastian Larsson cross at the back post.

Tottenham may well look back on this as a point gained, but for now it represents an unsatisfactory reward from a frustrating afternoon.

"We weren't going to allow them to come here and pick up three points. We had some chances ourselves.

"While we didn't reach the heights of last week [at Manchester City] in terms of possession we were up against a top team vying for a Champions League place. It has been a commendable effort from our players.

"We played two teams in the top four. We should have won at City and have got a draw here today."

"It's always a difficult place to come but I thought it was a game we could have won.

"They looked to play on the counter-attack and it was difficult to break them down. It's an important point, though, and a clean sheet and if you keep picking up clean sheets you won't be far away."