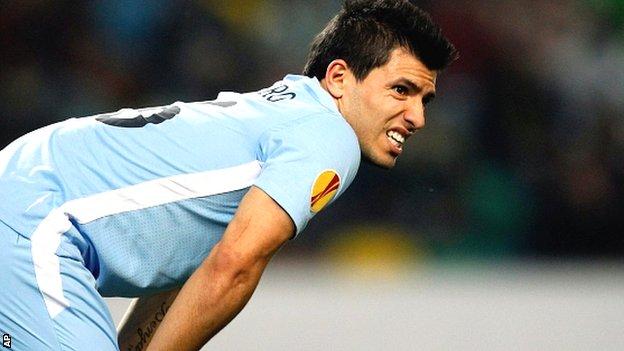 Refusing to elaborate on the mystery complaint, Mancini instead said: "It is a stupid injury. It was not his fault.

Mancini was repeatedly asked about the nature of Aguero's problem but he refused to give details.

"I prefer not to say," the Italian replied. "But he couldn't play against Stoke and can't play tomorrow. I hope he can recover for Arsenal next weekend."

The 23-year-old's injury leaves Mancini with Mario Balotelli, Edin Dzeko and Carlos Tevez as his available strikers for Sunderland's visit.

However, Tevez is still not considered fit enough to start and Dzeko has not scored since 25 February.

City are second in the table, three points behind Manchester United with eight games of the season to go.

Captain Vincent Kompany is expected to return after four games out with a calf injury, but fellow defender Joleon Lescott remains sidelined with a groin problem.