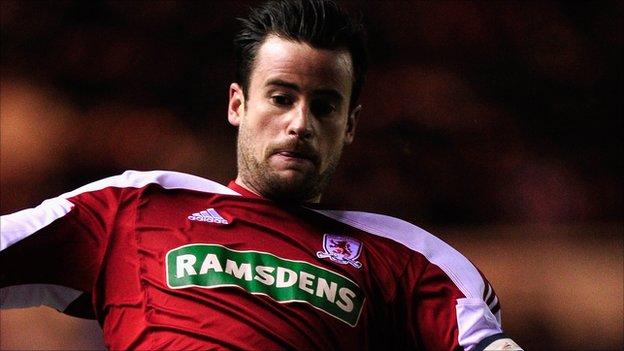 Middlesbrough defender Matthew Bates could be out for a number of months after scans revealed he suffered a recurrence of a knee injury.

Bates, 25, who has endured the same injury on four previous occasions, was withdrawn early on in Wednesday's 1-1 draw against Ipswich Town.

"He's had a scan and he's travelled to London today to see a specialist," Mowbray told BBC Look North.

"It's probably prudent for us to leave it until he's seen the specialist."

The Boro boss added: "It's wise we don't say anything, we can at times think the worst and yet I hope the specialist has a positive outlook and it's better news than first feared."

In response to the injury situation at the Riverside, Mowbray has recalled Stephen McManus from a loan spell at Bristol City.

And with Bates and Rhys Williams both ruled out with what look like long-term problems, the Scotland international is set to make his first appearance since November's 2-0 home defeat by West Ham United in Saturday's trip to Brighton.

"We didn't have many options really," added Mowbray.

"The benefit of bringing Stephen back is he has been playing football rather than sitting on the bench for the last few months, which is a big ask sometimes.

"Hopefully he comes in and he's a very professional man, he's been brought up the right way and he had found it frustrating not being in the side.

"From being an established player, and international footballer, captain of Scotland and Celtic he wanted to go and play, but now he needs to come back and help our football team."