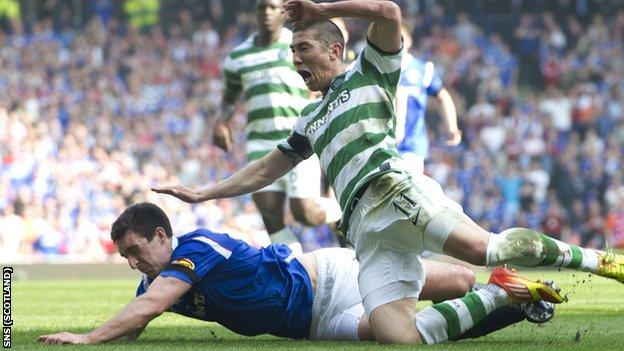 Celtic have lost their appeal against defender Cha Du-Ri's red card in the 3-2 Old Firm defeat at Ibrox.

Referee Calum Murray dismissed the South Korean in the first half of Sunday's game following a challenge on Lee Wallace.

The full-back's one-match ban stands and he will miss the home league game against St Johnstone.

Neil Lennon, meanwhile, has been called to appear before the SFA to explain alleged misconduct during Sunday's loss to Rangers.

The Celtic boss was sent from the technical area and said after the match that he was prevented from doing his job and could not understand the decision.

A date for Lennon's hearing has been set for 19 April and the manager has until 3 April to respond to the notice of complaint.

The notice relates to the SFA's Rule 203 which states: "No member of Team Staff shall commit Misconduct at a match" where misconduct can be regarded as "dissent, the adoption of aggressive behaviour towards a match official and the repeated use of offensive, abusing and insulting language."