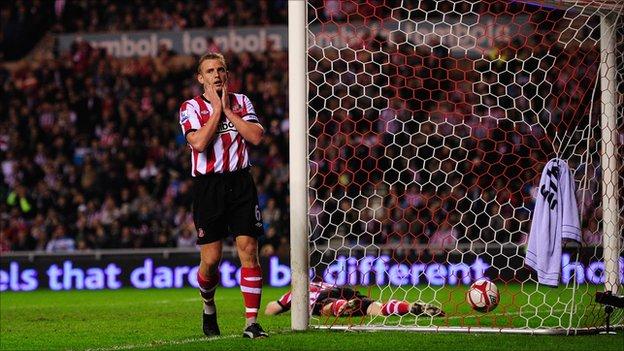 Sunderland captain Lee Cattermole has said he and his team-mates need to show fans improved character and performance after Tuesday's FA Cup exit by Everton.

and face a trip to Premier League title-hopefuls Manchester City at the weekend.

"The lads are hurting, but they're going to have to come out and respond," Cattermole told BBC Newcastle.

"We are going to find out about their characters on Saturday."

Tuesday's tie presented the Wearsiders with their first opportunity to make the last four of the FA Cup since 2004, when Millwall ended their progress at Old Trafford.

However, Everton were convincing winners on the night, scoring a goal in each half to seal an all-Merseyside semi-final at Wembley next month.

"There'll be all sorts of comments about where we went wrong," Cattermole added.

"Once it went two-nil it was going to be really hard. We slung subs on but they sat deeper and were big and strong.

"They seemed bigger and stronger all over the pitch and they won a lot of first and second balls.

"We're not the most experienced side. We're going to learn from it. It was a big night for everybody and we're going to take as much out of it as we can."