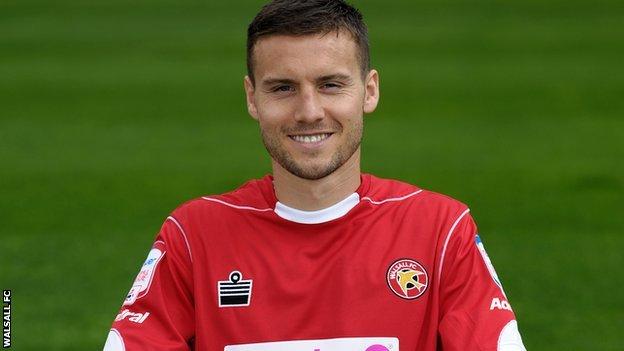 The 27-year old was playing his 193rd league game, having made his debut for Birmingham City in 2002.

"Yeah, it's been a long time coming," Sadler told BBC WM. "The gaffer's been giving me all sorts in training, a few rib-ticklers.

"I'm just glad to get that first goal and it was an important one."

Victory saw the Saddlers climb out of the relegation places in League One, moving two points clear of Wycombe, and it came despite conceding an early lead to the visitors.

"It was a massive three points for us," said Sadler. "It was a big game, even bigger considering we went behind so early."

Sadler, whose career has also included spells at Shrewsbury, Northampton, Watford and Stockport, had already missed a great chance in Tuesday's game before finally breaking his duck.

"I'm not reflecting on that," he laughed. "Forget about that! The first chance was just obviously setting me up for the second one, wasn't it?

"I don't think they expected anyone was behind them. I just grasped the opportunity to get in and I'm looking forward to telling my missus how good it was."

Among the other high points of Walsall's win was an outstanding equaliser from an Emmanuel Ledesma free-kick.

The Argentine netted the first goal of his second spell at the club - and he has already made quite an impression on Sadler.

"He was a breath of fresh air," added Sadler. "I don't know that much about him but the others all said very positive things. Now I've seen for myself how good he can be."

Walsall's fight for survival continues with two matches against clubs in the bottom four, Saturday's trip to Rochdale being followed by a home game against Chesterfield.