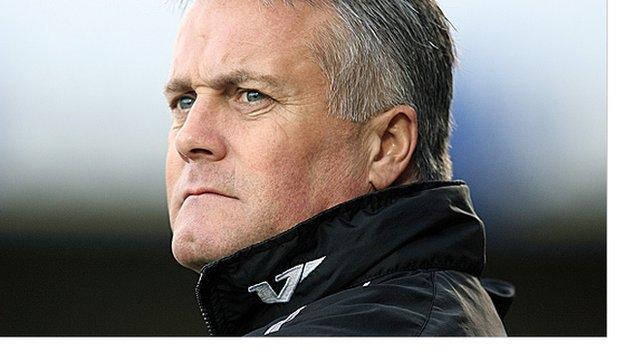 Port Vale boss Micky Adams says he backed the referee's decision to abandon Tuesday's match at Shrewsbury after a fire broke out in the stand.

Vale were 1-0 down when the game was brought to an end in the 66th minute.

Adams told BBC Radio Stoke: "The lights went out and we were told there was a fire and we had to go to the middle of the pitch.

"We've seen games restart but if the floodlights aren't working then it's simple, the game has to be abandoned."

No new date for the re-arranged fixture has been announced although Port Vale fans who attended have been asked to keep their ticket stubs for possible re-admittance.

Despite trailing 1-0 at the time of the abandonment Adams felt his team was still in the game.

"Their keeper has made two great saves and it's not as if we weren't in the game. Graham Turner will be more frustrated than I am but that's football," Adams added.

"The players are disappointed they have to come back here."

The beleaguered Valiants have got a race against time to get players fit for the visit of bottom club Dagenham and Redbridge on Saturday.

Adams concluded: "I don't know what sort of side I am going to have available for that game, we've got away with it this time but having said that the players were first class."