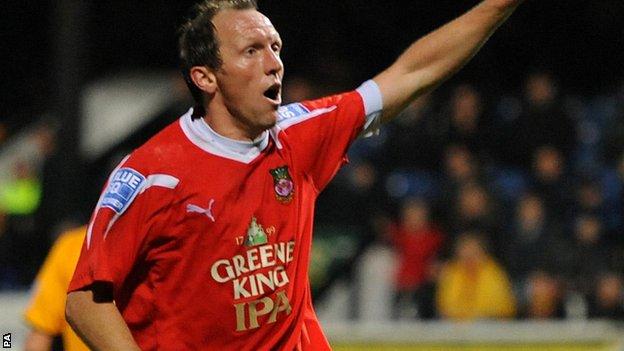 Wrexham player-manager Andy Morrell has said his side can still secure automatic promotion to the Football League.

Morrell's side are now six points adrift of leaders Fleetwood but with a game in hand following a 4-2 win at Darlington.

"[With] seven games to go can we get promoted automatic? Yes we can," said Morrell.

"We have to win our games of football and fortunately we've come out of this one on the up.

"It had to be three points really to try and stay in it and we've managed to get that and we go into Cambridge with a win under our belts."

Wrexham travel to Cambridge United on Saturday after they bounced back from the home defeat against Forest Green with a win at Darlington.

The Welsh side were ahead 2-0 at the Darlington Arena before the home side scored twice in two minutes to draw level with 20 minutes remaining.

"I thought we were probably the better team and I thought we deserved it," said Morrell. "But we made hard work of it.

"We were down and out a little bit and we've managed to galvanise ourselves and pick a win away.

"It's a tough place to come and win."

The victory guarantees Wrexham's place in the end of season play-offs, where they lost at the semi-final stage last season.

"That was our aim at the start of the season. I'm pleased and delighted for the players. It's hard work for all of us. "