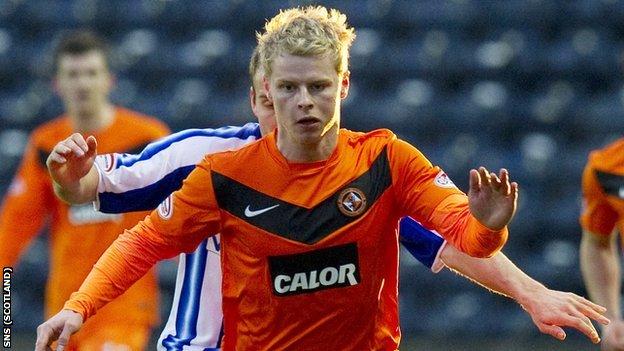 "I was a bit unlucky with injuries and spent a bit of time out of the game," Mackay-Steven told BBC Scotland.

"I played at Airdrie for six months last season just to get some game time and that went well.

"I am enjoying myself greatly here [at United]. I think we have got a great team with a lot of talented young and experienced players."

The former Liverpool youth player scored United's second in the weekend win against Hibernian, his fourth goal in 29 appearances this season.

His performances and displays of skill were rewarded when he made his debut for Scotland's Under-21 side against the Netherlands in February.

"I was at Ross County and then Liverpool for a few years but got a niggling injury that I never really got over," said the 22-year-old.

"Obviously it was a good experience, but I always knew when I left I wanted to come back home."

Mackay-Steven is a native of Thurso and says there are not too many professional footballers from the Highland town.

"It's a small town and it's a fair trek for all my family to come and watch me play," he added.

"If I get a spare chance, I like to go home, but it's a long way. I think I need a week off anyway as a weekend is not enough."