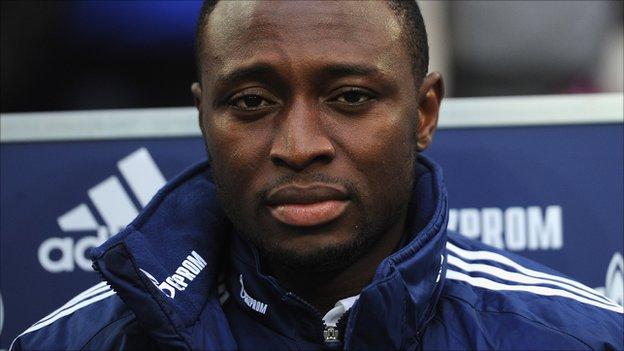 German side Schalke 04 have exercised the option to contract loan signing Chinedu Obasi on a permanent basis.

But Schalke have quickly activated the purchase clause in his contract, by securing the forward until June 2015.

"I love everything at this club and it's a great opportunity for me to continue my career here," said Obasi.

"You need to look at the management, the quality of players in our squad, amazing coaching crew and passionate fans to understand why this is the place for me.

"For the club to extend my contract here is a huge challenge for me. Now I need to keep working hard and give my best as always.

"I'm extremely delighted to know that all I need to focus on now is just the football," Obasi told BBC Sport.

Since arriving at Gelsenkirchen, the 25-year-old has done enough to convince the club to secure his services for a long-term.

"He's very fast and can beat his opponent in one on one situations.

"He's lived up to the expectations so far and that's why we have signed him on a permanent basis."

Obasi moved to Germany in 2007 from Norwegian first division side Lyn Oslo to join Hoffenheim, then in the German second division.

In his first year with Hoffenheim, he was part of a promotion-winning side that took them into Germany's top flight for the first time in their history.

Schalke currently sit third in the Bundesliga and face Athletic Bilbao in the Europa League quarter-finals this week.