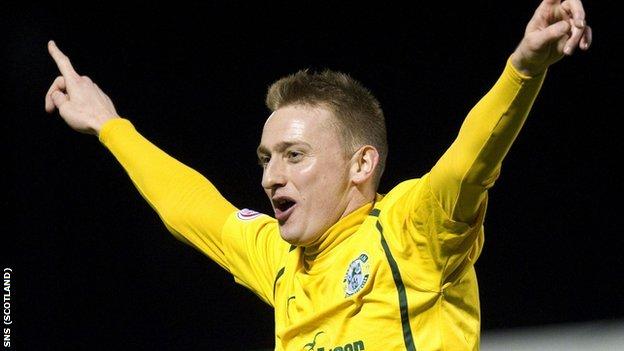 Derek Riordan has signed for St Johnstone until the end of the season.

The former Hibernian and Celtic striker had a successful trial with the Perth club after a spell at Chinese Super League outfit Shaanxi Chanba.

A St Johnstone statement said the short-term deal suited the club and the player, who has three Scotland caps.

Riordan came through the youth ranks at Hibs and starred for the first team before moving to Celtic for two years in 2006.

He returned to Easter Road for three seasons before opting for a move to China last summer amid interest from Major League Soccer outfit Houston Dynamo and Championship side Crystal Palace.

His goals in green and white have made him the third-top scorer in Scottish Premier League history.

A club statement read: "With the player without a club at the moment and the club limited for choice in the forward area [Marcus Haber is currently away with the Canadian international side at the Olympic qualifying tournament] this short-term deal is seen as a help to both parties."

If St Johnstone and Riordan can agree a deal beyond the summer it would mitigate the potential loss of Cillian Sheridan and Francisco Sandaza, although manager Steve Lomas would prefer both to stay.

Sheridan is on loan from CSKA Sofia, while his Spanish strike partner Sandaza is out of contract in the summer.

"If we can push up the league and get some more money, maybe getting into Europe will go towards getting Francisco Sandaza and Cillian Sheridan to stay," said Lomas.

"I still haven't given up hope of re-signing Fran. I'd love to sign him and Cilly."