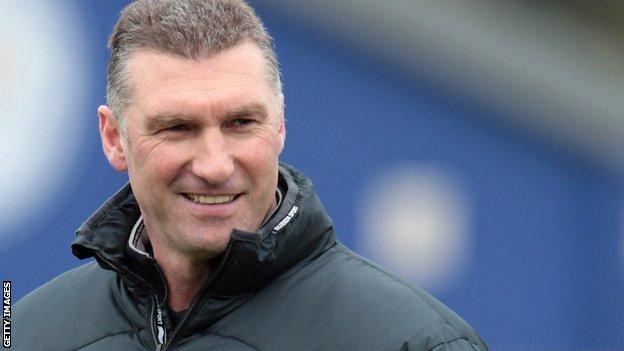 Leicester City boss Nigel Pearson says his side must forget their indifferent season and just focus on the run-in if they are to sneak into the play-offs.

The pre-season Championship favourites have finally started to show signs of consistency and are just five points off the top six with eight games left.

"We have to remain focused on the job rather than dwell on what has gone," Pearson told BBC Radio Leicester.

"If you do that you are creating a negative atmosphere."

The Foxes sacked manager Sven-Goran Eriksson in October following a 3-0 home humiliation at the hands of Millwall.

And although the current campaign has continued to be plagued by inconsistency, Pearson has been encouraged by their recent run.

Leicester have only won back-to-back league fixtures once so far this season. And that did not happen until the wins over Derby County and Coventry City in late February and early March

"We have to look to build on a very good result on Saturday [beating Hull City 2-1]," said Pearson, who is now in his second spell as City boss. "Over the last three games we have got seven points.

"There are always lessons to be learned but I am very much of the opinion that we have to live in the present."

Had it not been for twice surrendering the lead against Blackpool last week, Leicester would have been within three points of the play-off spots heading into Tuesday's East Midlands derby against Nottingham Forest.

Pearson knows they must adopt an attacking approach to make up the deficit.

"Clearly we have to win games," he added.

"We have to concentrate on the job in hand. We need to be as positive as possible.

"When we defend from the front like we did on Saturday we are a very dangerous side.

"I don't think there is any mileage on dwelling on what has gone. We can't affect those results that have already been played."