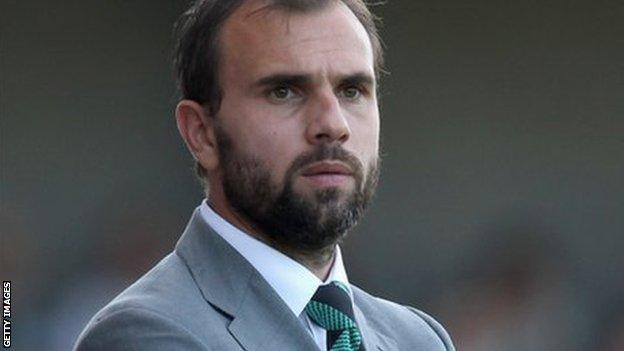 The board of Plymouth Argyle will review manager Carl Fletcher's work before deciding whether to give him the job for next season.

Fletcher took over at Argyle following the

He has kept the club in touch with their League Two relegation rivals after the club battled administration at the start of the season.

"Clearly the board will review the position as we come towards the end of the season," said owner James Brent.

"But Carl, if he's interested, had got a strong candidature," he added to BBC Radio Devon.

Fletcher, who had been captain, was put in charge of the side on a temporary basis following Reid's dismissal and made the full time manager following Brent's takeover in October.

At the start of the season Argyle had few recognised first team players and the former Wales and West Ham midfielder has strengthened the squad throughout the season.

He began his reign by guiding the Pilgrims to their first win of the season over Macclesfield, but has led Argyle to only seven wins since then and oversaw the club getting dumped out of the FA Cup by non-league Stourbridge in a first round replay.

Earlier this year the club to support Fletcher, who is in his first managerial position.

"When you look at the statistics, the reality is we got one point from the first nine games, which is the equivalent of having one-and-a-half administrations."