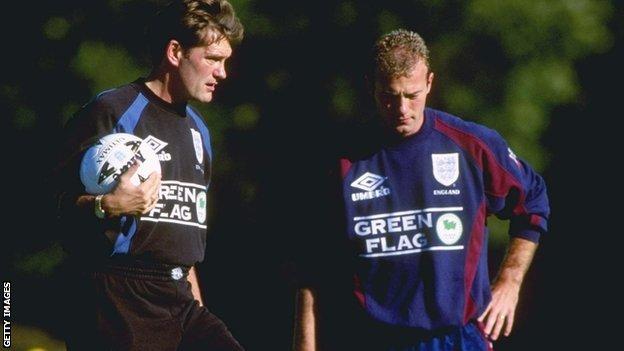 Alan Shearer says Glenn Hoddle is a realistic contender for the England manager's job should Harry Redknapp not be appointed.

The former England boss said on Monday his "life would be incomplete" without a second opportunity as national boss.

Shearer was made England captain by Hoddle, scoring five goals during qualification for the 1998 World Cup and two in the tournament.

"His coaching was excellent and he had a decent record," Shearer said.

Shearer won 63 caps and scored 30 goals for England during a 10-year international career that ended when he retired after Euro 2000.

England were knocked out in the second round by Argentina in the match which saw David Beckham sent off for kicking Diego Simeone.

Despite the exit, the team were widely praised for their performance.

Asked if Hoddle was a realistic contender to succeed Fabio Capello, who quit in Feburary, Shearer told BBC Sport: "Why shouldn't he be? He was successful when he was England manager.

"On the pitch everyone liked him. He gave me the England captaincy so I thought he was fantastic!"

Hoddle resigned in 1999 after controversial comments about disabled people and has not coached since leaving Wolves in 2006.

Shearer said the nature of Hoddle's departure could be an issue for any return, but added: "I think there is only one man for the job: Harry.

"If he gets it, great. If he doesn't, then those questions [about Hoddle's resignation] we will ask after that."

While Redknapp remains the favourite to succeed Capello, West Brom boss Roy Hodgson has been linked with the role and England caretaker manager Stuart Pearce has said he would be happy to remain in charge for Euro 2012.