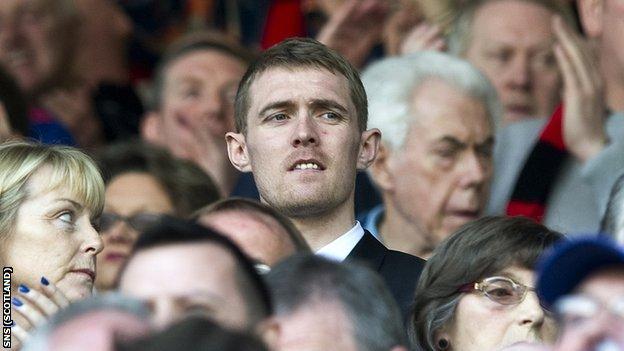 As the domestic season nears its end, Euro 2012 is beginning to come to the forefront of the minds of players, managers and fans alike.

But, for Scotland captain Darren Fletcher, the beginning of the 2014 World Cup qualifiers is of primary focus.

The Manchester United midfielder is currently taking an extended break from football as he battles the bowel condition ulcerative collitis.

And, as well as making a return to club football, the 27-year-old is eager to lead his country once again.

"I'm desperate to get back playing for Scotland and get back to captaining my country, which I take great pride in doing and relish every moment of," he told BBC Scotland.

"Towards the end of the [previous] campaign, we performed fantastically well and, bar two shocking refereeing decisions, we would've been in the play-offs, there's no doubt about that.

"We're going in the right direction, without a shadow of the doubt."

The two refereeing decisions Fletcher refers to were penalty calls, one given against the Scots before they themselves had one turned down in a match against the Czech Republic.

Fletcher had put Scotland 2-1 up before the visitors levelled from the penalty spot and a late spot-kick denial ensured the match ended in a draw.

The result was crucial in the final make-up of the Euro 2012 qualifying section, with the Czechs progressing to the play-offs.

"You can't describe moments like scoring for your country at Hampden Park," said Fletcher.

"That goal should've been the winner. Two disastrous refereeing decisions really cost us."

Scotland will challenge Croatia, Serbia, Belgium, Macedonia and Wales for qualification to Brazil 2014 and Fletcher believes the six nations are evenly matched.

"When you look at the overall group, all the teams are very tight in terms of ability," he said.

"From the top seed all the way down to Wales as the bottom seed, every one of those teams will fancy their chances.

"There's going to be a lot of points to play for, a lot of points dropped, so it's the team that can put a good run together that will find themselves in a very strong position.

"All the focus will be on getting a good start in those two games at Hampden and seeing where it can take us."

The campaign begins in September but, before then, Fletcher hopes to be back playing for United.

"The challenge and the focus is being ready for next season," he added.

"It's an unpredictable illness, you don't know what future lies ahead of you.

"But I've got to stay strong and keep believing and I think that's an important side of it, positive thinking. I'm hopeful and really positive that I'll be back and back to my best."