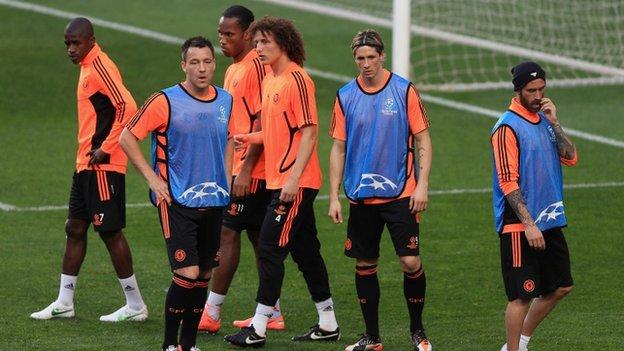 Chelsea could have a fully fit squad for tomorrow's Champions League quarter-final first leg at Benfica.

Benfica centre-back Luisao will likely form a partnership with compatriot Jardel as Ezequiel Garay is doubtful.

Top-scorer Oscar Cardozo and Rodrigo are set to lead the attack for the hosts.

Chelsea manager Roberto di Matteo defended the quality of his squad after Frank Lampard claimed the players were "not as good as we used to be".

"Everybody seems to have an opinion, and they have that right, but I disagree," he said.

"I believe in my team, my squad, my players.

"We have, still, many games to play in the Premier League to reach fourth, and two games in the quarter-finals of the Champions League.

"It looked a little gloomier two weeks ago, so we're pleased to be here.

"If we had a few more points in the Premier League, we wouldn't be talking like this.

"It's a very fine line between success and failure. This team has all the ability to play a very good game tomorrow night and show the qualities these players have."