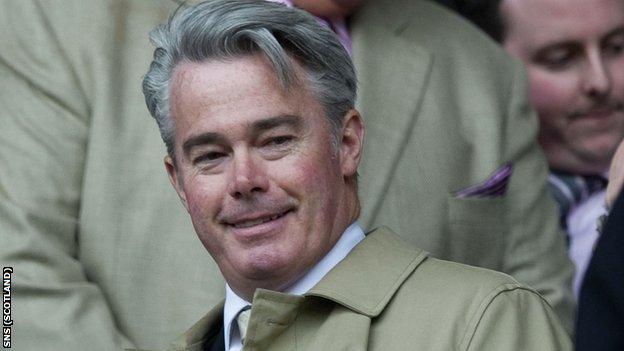 Prospective Rangers buyer Paul Murray has told BBC Scotland he will walk away from Ticketus if he cannot strike a deal in the interests of the club.

Murray's Blue Knights consortium has been allied to the company that funded Craig Whyte's takeover last May.

Rangers' administrators are considering reneging on the Ticketus deal.

Murray says it makes sense to keep them on board but added: "If we can't do a deal with them that's in the interests of the club, we won't do that."

We need to come to a decision soon

The Blue Knights are one of five parties interested in buying Rangers out of administration, with further UK-based as well as overseas interest under consideration by administrators Duff and Phelps.

A former director who left the board shortly after Whyte's takeover, Murray made his bid public soon after Rangers entered administration on 14 February and has always maintained liquidation can be avoided.

If the administrators do decide to renege on the £24m deal Ticketus did with Whyte, the finance company becomes the club's largest unsecured creditor, albeit with the judgement on a potential HM Revenue Customs bill still to come.

"Ticketus have rights [to future season tickets] so if the administrators breach them, they become the largest unsecured creditor," said Murray.

"Obviously, to exit administration through a CVA [creditors voluntary arrangement], Rangers have to reach agreement with the major creditors.

"That was always the reason for talking to Ticketus. The club can't afford to stick to the original deal, so what we wanted to do was restructure that.

"But if we can't do that, we'll pursue other options.

"We're in discussions just now because we need to come to a decision on that soon."