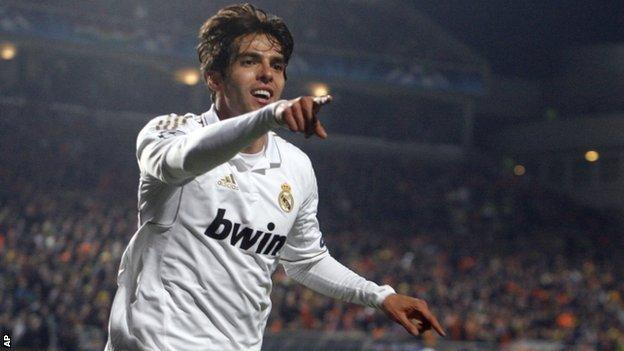 Kaka came off the bench to inspire Real Madrid to victory over a spirited Apoel Nicosia side in the first leg of their Champions League quarter-final tie.

French striker Karim Benzema had missed an open goal in the first half before he buried a curling cross from Kaka.

Brazilian Kaka - who was in superb form - then finished off a fine run and pass from fellow substitute Marcelo.

And Benzema wrapped up the win in stoppage time when he swept in Mezut Ozil's ball from the right.

Real were dominant before adding their three late goals, and are now firm favourites to reach the semi-finals, where they would face either Marseille or Bayern Munich, who play their first leg on Wednesday.

The Cypriots had already accounted for Lyon - perrenial foes of Madrid in the Champions League - and despite losing defender Marcelo Oliveira to injury inside 10 minutes produced a rousing first-half display to shut out Jose Mourinho's side.

Ozil tested goalkeeper Dionisis Chiotis with a volley and then Benzema somehow missed from three yards out minutes before the interval.

Ailton lifted the home crowd with a wonderful solo run down the left at the start of the second period before the introduction of Kaka and Marcelo triggered a change of gear by Real.

Kaka crossed deliciously from the left and Benzema dived to head past Chiotis, before Marcelo was caught in the box by Paulo Jorge but kept his balance and cut the ball back for the former AC Milan playmaker to slot home.

Benzema then tucked away Ozil's inviting low pass in the last minute for his 26th Champions League goal to put Real on course for the last four.