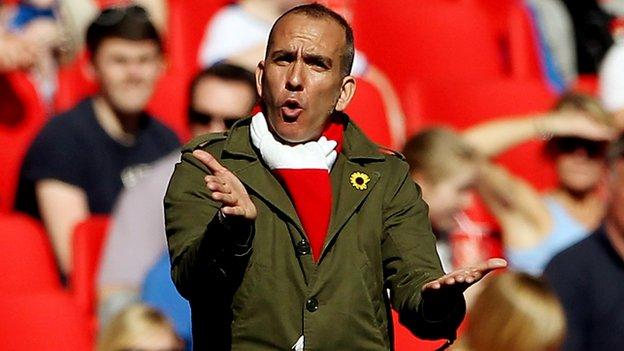 An Oliver Risser own goal and a late strike by Craig Westcarr sealed a 2-0 win at Wembley for the Spireites.

"Today we deserved to be a loser because we were all weak," Di Canio told BBC Wiltshire.

"I hope we take the humility and work hard during the week because the next game is important for us."

Risser turned the ball into his own net two minutes after half-time to gift Chesterfield their opening goal, and the Robins boss could not hide his disappointment.

"When you lose you have to say you lose together," Di Canio added.

"We lost together, but it's clear that Oliver, an experienced player, has to feel responsible after his mistake.

"I feel responsible too, in the way I choose my players, but now we have to come back to Swindon and obviously we are sad because in one game, when you have to win or die, a lot of players were incapable of playing their best at this stage.

"I don't want to say we have many in our team but today on a special occasion we proved that some players are not ready to play this game."

Swindon sit four points clear at the top of League Two with two games in hand over second-placed Torquay, and Di Canio is keen to switch his attention to beating Bristol Rovers on Saturday.

"I am happy that we have a tough game straight away, because we have to prove that we are not a donkey.

"The defeat doesn't mean that we haven't had a very good season, the fact that we have reached the final is a fantastic achievement, but we are still top of the league.

"The league is the priority, we have to look at this season as very good, as long as we go up. If we don't it will be a disaster."