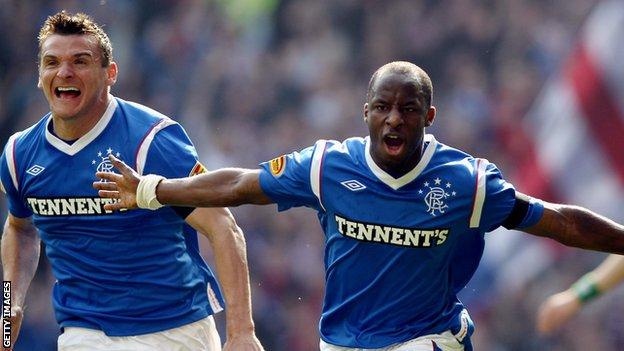 Rangers proved too hot to handle for Celtic at a sun-kissed Ibrox on Sunday.

But how exactly did Ally McCoist's men torpedo Celtic's hopes of a title party?

Sone Aluko capped an impressive display with a stunning goal in the 3-2 win and Lee McCulloch played a variety of positions while terrorising Celtic's rearguard.

Steven Whittaker and Lee Wallace bombed forward from the wide areas to keep Celtic under the cosh, with Dorin Goian and Carlos Bocanegra restored to central defence.

And Celtic's full-backs were peppered with a combination of ground and aerial assaults as the hosts drove forward.

"Aluko's found a level of consistency at Rangers that's made him a fans' favourite," Paterson said. "He certainly boosted that reputation in the Old Firm derby: his all-round play was good but his goal was sensational.

On the day, Rangers' wide players got more involved in the Celtic half than the visitors did in pressuring Allan McGregor

"The nutmeg and then the drag inside and the finish - in terms of Old Firm games there haven't been too many better than that - he was a major plus.

"Aluko had the perfect foil in Lee McCulloch, who was a massive performer as well. Rangers decided to go back-to-front to try to unsettle Celtic and that worked an absolute treat.

"McCulloch won so many high balls which allowed Aluko to play off him. As a partnership, they were excellent. When you start well, get the goal then suddenly you're breaking forward and you have three or four options.

"Lee Wallace will run up and down the flank all day long. Rangers had great outlets in the wide areas: if they were in trouble then they knew they could go long to McCulloch or get it into the feet of Aluko then he could take it on."

"You didn't see a lot of Cha or Adam Matthews in the forward areas," he added. "On the day, Rangers' wide players got more involved in the Celtic half than the visitors did in pressuring Allan McGregor."

Former Celtic player and coach Willie McStay believes a tactical change in where to deploy Georgios Samaras contributed to defeat for Neil Lennon's side.

"Neil always likes to play Samaras at Ibrox and he's played well there in the past," said McStay, now assistant boss at Stockport County.

"You could see his attributes when he picked the ball up and ran three quarters of the length of the pitch.

"He created a great opportunity and was unlucky not score himself. You'd be looking for a better connection from Stokes to finish it off. That's his strength. You wonder when Stokes and Gary Hooper will get the chance to face Rangers as a partnership.

"I thought the decision to deploy Samaras through the middle nullified that for Celtic on the left hand side.

"If you had the energy of Samaras, in a deeper role driving forward, then it immediately takes away from Rangers' numerical advantage.

"Taking off Stokes early and moving Samaras up there meant Celtic lost a little bit of that counter-attacking threat that Samaras and Brown would have provided. That was a big decision at the time of Cha's sending off.

"When you're down a player you need to be able to counter-attack and get back into the game. You're not going to have a lot of the ball; you'll have to be tight and when you do win possession then you'll have to break quickly."

McStay said Aluko proved a thorn in Celtic's side during a difficult afternoon for the visitors.

"He did well with the run and finish for the goal, but he played behind Wanyama and came into the spaces on the right and the left," he said.

"He was able to threaten in the space between Celtic's full-backs and centre-halves."

"This time last year we were talking about Kris Commons being one of Celtic's most influential players," said McStay. "A year down the road he's not featuring regularly in the team at all.

"He did add some spark when he came on and Rangers, 3-0 up at that time, were maybe seeing the game out.

"Maybe they lost a bit of focus but Commons got on the ball. He delivered the ball for Rogne's goal and in the lead up to that free-kick, he's involved three times in the move."