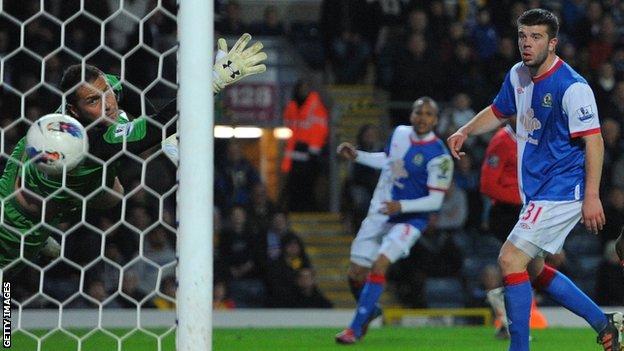 Manchester United extended their lead over Manchester City at the top of the Premier League to five points as late goals from Antonio Valencia and Ashley Young gave them victory at Blackburn.

United struggled to make the breakthrough that would see them open up a potentially decisive gap over their rivals from across the city.

But a trademark late surge brought a win that ensures Sir Alex Ferguson's side take a firm grip on the pursuit of the title with seven games to go.

In contrast Rovers, who battled gallantly for so long and were denied by the athleticism of United keeper David de Gea in the first half, now drop back into the bottom three as the scrap to escape relegation increases in intensity.

The visitors were not at their best but the job was done and explosive finishes, first from the outstanding Valencia and from substitute Young five minutes later, demonstrated the quality required at these defining moments of the season.

The reigning champions confirmed a record 19th title with a draw at Ewood Park last season - and the reaction from their supporters when referee Howard Webb brought matters to a conclusion suggested they believe a hugely significant step has been taken towards number 20.

United applied the early pressure with Javier Hernandez having early opportunities to make the breakthrough as Blackburn afforded the leaders too much time and space.

The Mexican was off target after being picked out brilliantly by Wayne Rooney and then struck the woodwork at the near post from Valencia's cross, with the hosts' goalkeeper Paul Robinson clutching the rebound gratefully.

Rovers were sitting deep as United controlled possession, but broke out after 17 minutes and the dangerous Junior Hoilett tested De Gea with a shot from 20 yards that the keeper clawed away.

Valencia's delivery was a constant danger - and he was the provider again six minutes before the interval, only for Phil Jones to squander the chance to strike against his former club by heading wastefully wide at the far post.

If United needed any warning that there was still work to be done, the hosts provided it as De Gea was forced into two fines saves in the closing moments of the half.

The Spaniard once again showed great reflexes to make a one-handed save from Marcus Olsson, then turn Grant Hanley's header over from the resulting corner.

It was Robinson's turn to excel after the break as he saved well from Rooney's free-kick and Rafael - but De Gea then enjoyed a moment of good fortune.

He fumbled Morten Gamst Pedersen's free-kick, but there was no home attacker on hand to take advantage.

Pedersen then had the ball in the net but only after it had gone out of play before Steven Nzonzi was able to get his cross in.

Ferguson had made two quickfire substitutions in an attempt to end Rovers' resistance, with Danny Welbeck and Ryan Giggs replacing Hernandez and Jones.

And the deadlock was finally broken with nine minutes left as Valencia cut in from the right before unleashing a powerful angled drive that went close to Robinson but carried too much power for the former England keeper to save.

Rovers' spirits sagged visibly and Young, on for Paul Scholes, settled the destination of the points with a fine turn and precise finish from the edge of the area to leave United and their supporters celebrating at the final whistle.