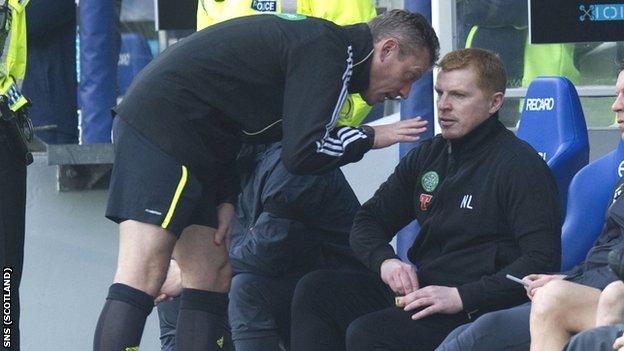 Celtic say Neil Lennon was advised by his own security staff against sitting in the stand at Ibrox after being sent from the technical area in the 3-2 defeat by Rangers.

Lennon had challenged referee Calum Murray at half-time following the decision to send off Cha Du-Ri for a foul on Lee Wallace.

The Celtic boss watched the second half on a TV screen in the Ibrox press room.

"I am entitled, as a manager, to speak to a referee," he told BBC Scotland.

"Who are they accountable to? Are they allowed to waltz through games criticism-free? I had, for me, a quiet word in the tunnel with the referee" he added.

A Celtic spokesman said: "Further to certain media reports today, for clarification, Neil was advised by Celtic's own security and operations staff not to enter the stand or directors box area at Ibrox at yesterday's match.

"He was then provided another area by Rangers in which to watch the match."

BBC Scotland understands officials decided to send Lennon off not only for the conversation in the tunnel, but for his behaviour towards fourth official Iain Brines in the first half.

And the incident in the tunnel at Ibrox, where his team were trying to clinch the Scottish Premier League title, will almost certainly produce another letter from Hampden.

The Celtic boss, though, was adamant he had done nothing wrong.

"I didn't think it was a sending-off," he said of Cha's red card for fouling Wallace as he raced towards Fraser Forster's goal.

"I'm not sure Wallace would ever have got the ball. We had cover and the contact is minimal.

"I was pretty upset about that decision and others in the first half.

"I got a warning by the fourth official, which was fine.

"I was critical of the [referee's] first-half performance. I didn't swear. I just put my point across, I didn't point my finger."

Lennon says he was told when he left the Celtic dressing-room after his half-time team talk that he could not return to the dugout.

"I got called in [to the referee's room] and he said, 'you're not going out', so he has deprived me of doing my job," continued Lennon.

"I have spoken to the delegate. They are saying one thing; I've got witnesses to say another.

"I had to send some of my staff in. I want some answers and I am not getting them at the minute."