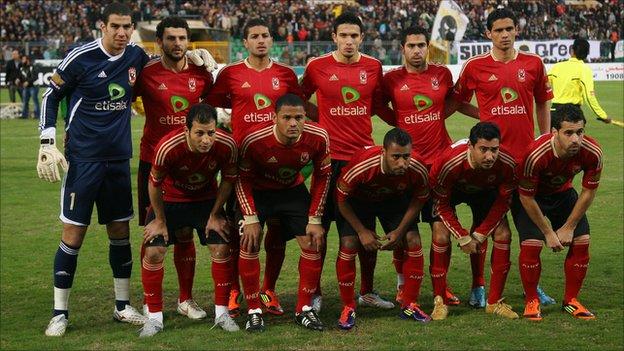 It was the first competitive game for the six-time African champions since the tragedy in Port Said in February.

Both Mohamed Aboutrika and Mohamed Barakat started the game for Ahly despite saying they had retired in the aftermath of the Port Said tragedy.

Ahly have not played since the death of 74 fans in Port Said prompted the Egyptian league's cancellation.

The game was however overshadowed by the death of a 13-year-old boy during clashes in Port Said on Friday.

The violence erupted at news the Port Said-based club Al Masry had been banned for two years over the tragedy in February.

Benin striker Razak Omotoyossi scored the only goal of the game after just one minute after he nicked the ball away from the goalkeeper and slid home past several defenders.

The start of the second half was delayed by 20 minutes as match officials tried to ensure that unauthorised people were moved away from the dugouts.

There was a huge win for Ghanaian champions Berekum Chelsea as they overcame visiting three-time African champions Raja Casablanca of Morocco 5-0.

Berekum's Dutch coach Hans Van der Plyum was naturally thrilled with the scoreline ahead of the second leg in a fortnight's time.

"Our strategy is to score more goals than the opponent," he said.

"If you get a chance against a side like Raja and play first at home, you have to take your chances - these teams are always difficult to beat away too."

Angola's side Recreativo do Libolo took a big step towards the next round with a 4-1 win over visiting Nigerian side Sunshine Stars.

Libolo took the lead through Rasca on 33 minutes before Bobo-Izu Azuka equalised for the Nigerians before half-time.

The hosts dominated after the break and Adawa restored the lead on 79 minutes with a long-range strike.

Darius extended Libolo's lead just two minutes later and Edy completed the victory in injury time at the end of the match.

Better news for another Nigerian club Dolphins as they overcame 2008 runners-up Coton Sport of Cameroon in Port Harcourt.

Egwin then missed a penalty in the 64th minute but his blushes were spared when Owusu Adei scored a late winner.

Finally, Africa's reigning Confederation Cup winners - MAS of Morocco - were held to a 1-1 draw in Guinea by Horoya.