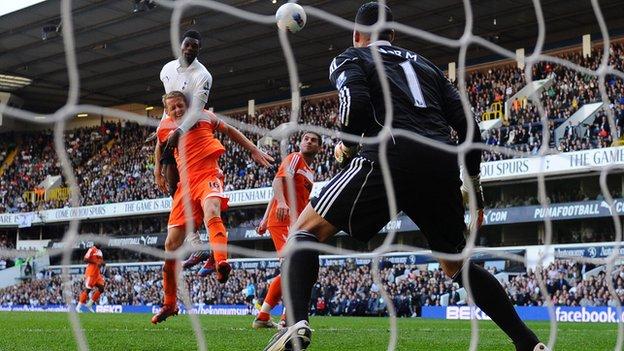 Rafael van der Vaart opened the scoring, side-footing home a loose ball from 20 yards, as Spurs looked to capitalise on .

Adebayor sealed the win as he nodded in Aaron Lennon's deep cross late on.

Tottenham had started unlike a team which had not won in the league for seven weeks, and winger Gareth Bale instantly set about making it an uncomfortable afternoon for Swans right-back Angel Rangel.

And it was Bale who provided his ninth assist this season as van der Vaart coolly side-footed his 11th goal of the season past Swansea keeper Michel Vorm.

Williams could have made amends moments later but the unmarked Wales international was not able to head Sigurdsson's corner goalwards.

Spurs join Arsenal on 58 points as they ended a run of five without a win in the league and it took a bit of doing. And it was two headers from Emmanuel Adebayor that was the difference. Spurs are back on track.

But Swansea had Vorm, so often their hero this season, to thank for keeping out Younus Kaboul on the half-hour as the Dutch goalkeeper tipped the Spurs defender's header around the post.

Bale fired just over twice while Modric narrowly missed a header as Spurs tried to turn their dominance into goals.

And Tottenham may have doubled their lead if Modric had played in an unmarked Adebayor at the end of the first-half. Instead, the Croatian playmaker's mis-hit shot dribbled wide.

Yet, as much as Spurs were on top in a pulsating first half, Swansea controlled the opening of the second period.

Sigurdsson gave Tottenham a warning of what was to come when the Iceland international brought the best out of Brad Friedel.

His stunning left-footed strike was flying into the top corner but the veteran American keeper tipped the effort on to his left-hand post and wide.

Within minutes, Sigurdsson has beaten Friedel with an equally beautiful effort.

Wayne Routledge teed him up, after Joe Allen's shot had been blocked, and Sigurdsson's strike bounced under Kaboul and looped wide of Friedel into the right-hand corner of the net.

The leveller spurred Tottenham's comeback and only another superb Vorm save denied a near-post van der Vaart header from Bale's teasing left-wing cross.

Adebayor, though, was not to be denied his 13th goal of the season as he rose unmarked to head van der Vaart's pinpoint right-wing corner into the Swansea net.

Adebayor's 14th was similar as he guided Lennon's cross into the far corner of Vorm's net.