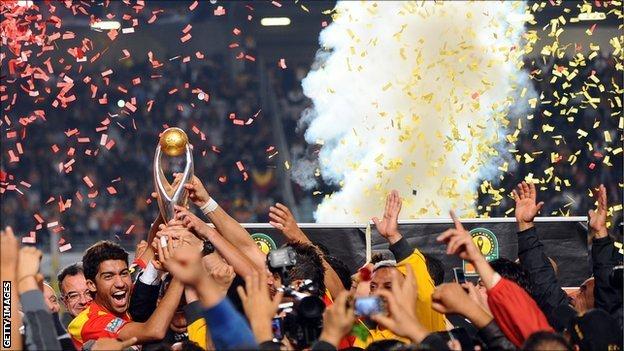 Esperance of Tunisia began the defence of their African Champions League title with a 1-1 draw in The Gambia against Brikama United.

Wajdi Bouazzi gave Esperance the lead in their secound round first leg game as early as the third minute as he capitalised on a defensive mistake to score.

Esperance went on to dominate the second half but were unable to find a winner.

Two other former winners also found it hard going on Saturday in the opening encounters of their second round ties.

The DR Congo team are back in the competition, having been disqualified in 2011 for fielding an ineligible player.

Meanwhile, Tunisian giants Etoile du Sahel, champions in 2007, could only manage a goalless draw away to Rwandan side APR FC.

The big winners on Saturday were Al Hilal, last year's semi-finalists, as the Sudanese took a huge step toward the next stage with a 3-0 win at DFC 9th Arrondissement of Central African Republic.

Al Merreikh have the edge after drawing 2-2 with FC Platinum on Saturday in their first leg tie in Harare.

But much talk after the game centred on the Confederation of African Football's (Caf) decision to bar FC Platinum from using their home ground for the match.

Joel Ngodzo, who netted Platinum's second equaliser, was particularly critical - even if his second-half goal gave Platinum a glimmer of hope ahead of the trip to Sudan.

"We were supposed to play in our home ground. This ground is not our ground. We are six hours from our ground," he said.

"But I trust my team to turn this (scoreline) around. There's no pressure on us. We'll keep on fighting."

Al Merreikh captain Saeed Mustafa headed in a corner seven minutes before the break, only for Ngodzo to have the final word just after the interval.

"We're happy with the result but we still need to work hard at home," Osunwa said. "It's not over yet and we'll be well prepared."

There was also a 2-2 draw for another Zimbabwean side as Dynamos twice took the lead in Mozambique against Liga Muculmana.

Takesure Chinyama opened the scorng for Dynamos in the 22nd minute before Stelio Ernesto equalised just after half-time.

Chinyama grabbed his second of the game three minutes later before Luis Vaz equalised for Liga Muculmana in the 73rd minute with a close-range header.

On Friday, Ivory Coast club AF Amadou Diallo won 2-1 at JSM Bejaia, leaving the Algerian side with work to do in the return leg.

Their Algerian compatriots, ASO Chlef, were held 0-0 at home by AS Vita Club of DR Congo.

Goals from Alou Bagayoko and Mahamane Cisse gifted Malian club Djoliba a 2-0 win at URA of Uganda. URA coach Alex Isabirye accused his players of showing Djoliba too much respect.