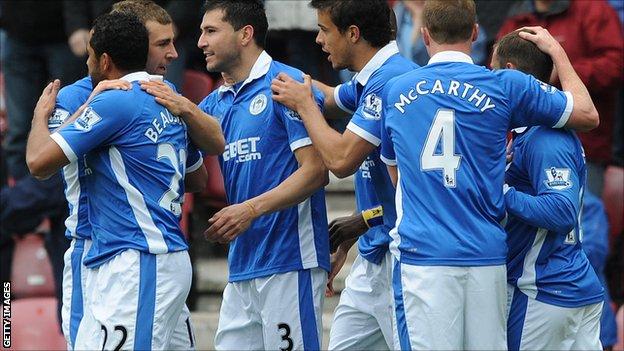 Wigan remain in the bottom three but moved level on points with Blackburn in 17th place following their victory over Stoke City at the DW Stadium.

Jean Beausejour and Franco Di Santo wasted great chances for Wigan before Moses struck to help give the Latics a real chance of survival.

The result means Wigan have 28 points, the same as QPR and Blackburn above them, although Steve Kean's men have a game in hand.

"These could be three vital, vital points for Wigan at the end of the season as they look to beat the drop. The players and the fans can now start to believe that they can beat the drop. Wigan might just pull off the great escape again."

Wigan's day could have been better had Bolton not come from behind to beat Wolves, while QPR also pulled off a shock victory over Arsenal.

Nonetheless with seven games remaining, Roberto Martinez's men have given themselves a great chance of pulling off another great escape.

This was a meeting of the league's two lowest scorers and it showed in a first half of woeful finishing.

Earlier Di Santo had failed to keep his nerve when one on one with Begovic, firing straight at the Stoke keeper's legs after blocking Marc Wilkinson's clearance.

At the other end Wigan had keeper Al Habsi to thank for keeping out Shawcross's front-post header while Begovic was also called into action, pulling off a decent save from Shaun Maloney's volley.

But by in large this was a half short on quality with the Latics showing why they have won just one league game at home all season.

Wigan continued in the ascendancy and got the goal they so desperately needed with Alcaraz powering home a header from close range following Beausejour's fine cross from the left.

The omens looked good for a Wigan victory with Stoke having scored only 10 goals away from home all season and the Potters brought on Ricardo Fuller and Wilson Palacios to help inject some energy into their play.

But it was Wigan who looked the more likely to score and Beausejour missed his second decent chance of the game, mis-hitting at the back post when a decent connection would have made it 2-0.

As the game drew to a conclusion, Wigan became increasingly nervous and Jerome fired over from just inside the box after the hosts failed to clear their lines.

But in the last minute Martinez's men sealed victory with Moses taking advantage of a mix-up in the Stoke defence to race clear, round the keeper and slot into the empty net.

Wigan boss Roberto Martinez said: "We've had seven draws at home when I felt we were as dominant as today. It's a real sign of maturity within the squad, a sign that we're learning with every game.

"That's very important, it's going to help our confidence. But I do feel this is the best season of the three that I've had with Wigan. We've started to get the results now and this group of players deserve that.

"Going forward we created chances, we looked lively, we missed some really good opportunities but that didn't affect us to keep going forward, and then the first goal is an outstanding bit of football.

"It was a very complete performance and magnifies how important the win at Anfield was. It was a historic day at Liverpool but if you don't win at home after that the points mean nothing."

"I thought Wigan were the better team, they played better on the day. It's very difficult for me to be critical of the team and the players because we've done so well lately and we've had a real tough run of games.

"There's incidents in every game you can pick out but it doesn't take away from the fact Wigan deserved the three points."