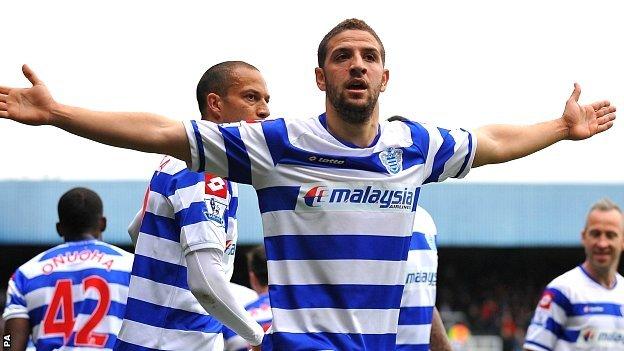 QPR collected a valuable victory in their battle against the drop as Samba Diakite's first goal for the club ended in-form Arsenal's winning run.

Adel Taarabt had darted past Thomas Vermaelen to fire in the game's opener but the hosts were soon pegged back.

Theo Walcott found space in the box and sidefooted into an open net after his initial effort came back off the post.

The Hoops remain in the relegation zone only on goals scored, having the same points and goal difference as the Blackburn side who occupy 17th place.

Manchester United, Manchester City, Tottenham and Chelsea are among QPR's final seven games, but, , Mark Hughes' side will fancy their chances of taking more big-name scalps in the run-in.

The hosts showed the industry and determination that has become their manager's hallmark, but there was no shortage of quality to their play either.

With seven Premier League successive victories behind them, Arsenal began with a confidence that ebbed away as they soon found themselves forced back.

As QPR grew in belief, Taarabt skinned Vermaelen with a slick shuffle of feet, advanced on goal and wrapped a low curling shot round Wojciech Szczesny to put his side ahead.

The Moroccan had taken more shots than any other player without scoring in the Premier League, but his finish made a mockery of that statistic.

QPR's fans were cheering every pass as their team moved the ball about neatly in the middle of the field, but their joy came to an end when Arsenal struck back without warning.

As a clutch of QPR defenders were drawn to van Persie on the edge of the box, Walcott sneaked free of his marker and tucked the ball home at the second attempt after the division's top-scorer had smuggled the ball to him through Clint Hill's legs.

With the scores level, neither side could gain an upper hand early in the second half.

Mackie was denied a penalty - falling under Laurent Koscielny's challenge while gamely chasing a long ball - in between dangerous efforts at the other end from Kieran Gibbs and Aaron Ramsey.

Van Persie, without a goal in his previous two games, had a great chance but Kenny managed to palm away his fierce shot after the Dutchman had scampered clear.

Diakite gave Szczesny no chance to match those heroics though as he slammed Mackie's cut-back into the net shortly after.

Arsenal threw on Marouane Chamakh and Alex Oxlade-Chamberlain and ushered Szczesny forward for a late corner, but Joey Barton came as close as anyone to adding to the scoreline, as the visitors tasted defeat in the league for the first time

Arsenal manager Arsene Wenger: "Our performance was not good enough to win this kind of game.

"They had a little bit of extra special commitment that took advantage of us in some specific positions defensively.

"Subconsciously something was missing today. In the Premier League, if you miss something on the commitment front you are beaten."