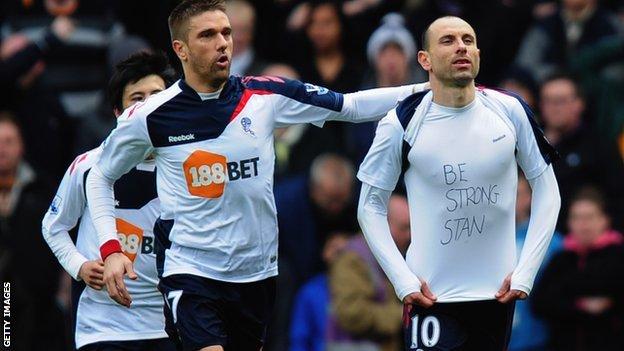 Wolves are now stranded six points adrift at the bottom of the Premier League as Bolton Wanderers staged an unlikely comeback to win at Molineux.

Owen Coyle's side were strictly second best for more than an hour and Wolves led deservedly through Michael Kightly's measured finish early in the second half.

The game turned on a hotly-disputed penalty when referee Jonathan Moss ruled Mark Davies had been fouled by Wolves captain Roger Johnson - despite there appearing to be little serious contact.

Bolton's Martin Petrov equalised from the spot before revealing a "Be Strong Stan" T-shirt in support of fellow Bulgarian Stiliyan Petrov after the Aston Villa captain was diagnosed with leukaemia.

As Wolves struggled to come to terms with the blow, which came when they were in complete control, Bolton took advantage to add further late goals through Marcos Alonso and substitute Kevin Davies.

Matt Jarvis' goal gave Wolves some hope but the silence around Molineux at the final whistle - celebrating Bolton fans apart - was an ominous sound as this result delivers a telling blow to any hopes they may have of avoiding relegation.

The scoreline barely reflected the game but the fragility of Wolves was obvious in the manner they collapsed after Bolton drew level and in an unseemly first half confrontation between captain Johnson and goalkeeper Wayne Hennessey that required the intervention of Kightly and the referee before calm was restored.

No such problems for Bolton, who recorded their third straight league to win to bolster their own survival hopes.

Wolves' aim was clear from the whistle as Bolton were tormented down the flanks by Jarvis and, to particularly good effect, Kightly.

Bolton keeper Adam Bogdan was forced to distinguish himself with an early save from the recalled Sylvain Ebanks-Blake in a moment that set the tone for a first half of virtually unbroken Wolves domination.

Steven Fletcher was causing problems for Bolton every time the ball was delivered into the area - as it was with monotonous regularity. Ryo Miyaichi swept the Scot's header off the line from Jarvis's corner and then he struck the woodwork from another inviting Kightly cross when he should have done better.

Petrov's volley was Bolton's only serious threat - but nerves were never far from the surface inside Molineux and tensions erupted as Hennessey and Johnson confronted each other on the edge of the area after Bolton had been allowed an opportunity.

Words were exchanged between the pair, who then went head-to-head and pointed fingers before Kightly stepped in to try to act as peacemaker. Referee Moss eventually brought the situation to a conclusion.

Bolton almost made Wolves pay for their profligacy in front of goal as David Wheater headed just wide after the restart - but the goal Wolves and Kightly so richly deserved arrived eight minutes after the interval.

Kightly cut in from the right before curling a precise left-foot finish into Bogdan's bottom corner as Wolves provided an end product to accompany all their pressure.

The lead only lasted 10 minutes before Bolton were level in the most contentious circumstances. Mark Davies fell under a challenge from Johnson, with contact appearing minimal at most. Referee Moss waited before pointing to the spot, to the obvious disgust of the home fans and players.

Petrov scored calmly from the penalty but the Wolves supporters continued to make their displeasure clear to their former player Davies for the rest of the game.

Wolves needed to regain their earlier thrust and they almost regained the lead with 14 minutes left as Jarvis took advantage of Bolton hesitation, only to head Fletcher's overhead kick wide from six yards out.

Bolton, however, had been given fresh impetus by their equaliser and took the lead with 10 minutes left to complete a turnaround that looked so unlikely for so long.

Hennessey did well to claw out Wheater's header, but he was powerless to stop Alonso bundling home after David Ngog's header bounced back off the bar.

And substitute Kevin Davies quickly added the third for Bolton, weaving his way through the Wolves defence with embarrassing ease before shooting low past Hennessey.

Wolves looked on the floor and the home fans were heading for the exits in droves as Jarvis gave them hope by beating Bogdan with a powerful drive.

But it was too late to save this game - and it now looks too late for Wolves to mount any sort of comeback to preserve their Premier League status.