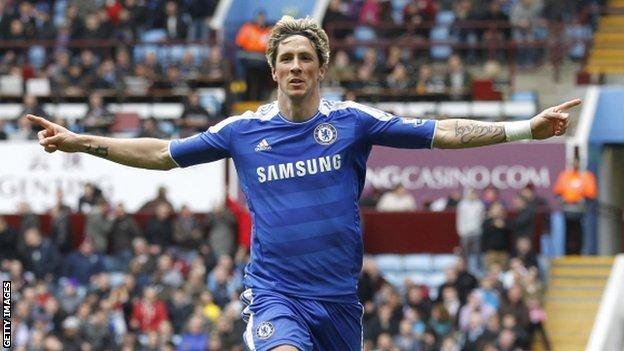 Aston Villa fell to defeat against Chelsea at Villa Park, just 24 hours after captain Stiliyan Petrov had been diagnosed with acute leukaemia.

A frantic few minutes then saw James Collins pull one back before Eric Lichaj drilled home to level.

But 60 seconds later, Ivanovic fired in from close range before Fernando Torres sealed the win in injury time.

It was an emotional afternoon at Villa Park with Petrov turning up to the ground with his family looking in good spirits.

Villa players wore "Support Stan" T-shirts while warming up with Chelsea donning shirts reading "Our thoughts are with you" in support of the Villa captain.

Before the game, boss Alex McLeish urged his side, who had picked up just four points from their last seven games, to push on and win for their captain - but with an injury-ravaged side which boasted six changes, that was always going to be difficult.

Chelsea, who are pushing for a top-four spot and the Champions League place that goes with it, had clearly not read the script, with Juan Mata orchestrating everything from the centre as the home side afforded the Spaniard too much space.

Their pressure was rewarded when Mata crossed and Torres had his shot saved before Sturridge pounced on the rebound.

David Luiz then limped off a minute before half-time with an ankle ligament injury to join striker Didier Drogba on the Chelsea sidelines.

Villa began the brighter after the break, but Ivanovic looked to have put the game beyond reach when he stabbed home Mata's cross for his first Premier League goal of the season to double Chelsea's lead.

Roberto di Matteo's men, who had only once in 13 years emerged victorious from Villa Park before this game, looked to be in control, as Villa's make-shift defence struggled to gel.

But Villa refused to back down and Collins jumped highest when a long ball from Eric Lichaj flew into the box to pull one back before the American turned goalscorer, drilling home substitute Marc Albrighton's low cross.

The mood around Villa Park was instantly lifted as the home side pressed for a winner, but their defence was left wanting when Torres' flicked on from a corner and Ivanovic fired home.

Villa were left exposed on the counter attack in extra-time as they hunted out an equaliser, with Daniel Sturridge running clear and supplying Torres who beat Given to score his first Premier League goal in six months.

Chelsea are now two points behind fourth-placed Tottenham who play Swansea on Sunday while Villa, who suffered their ninth defeat in 11 games, are still only five points clear of the relegation zone.