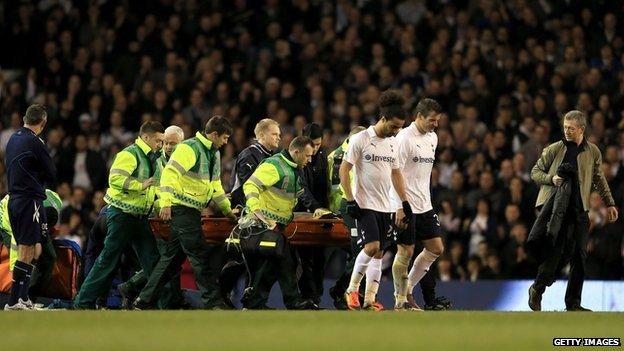 Doctors say it is too early to predict whether he will play football again.

But Dr Tobin said he is amazed by the 23-year-old's recovery so far.

In an emotional interview, Dr Tobin said: "It was 48 minutes when he collapsed to reaching hospital and a further 30 minutes after that. He was, in effect, dead at that time."

He added: "We were fearing the worst and didn't think we would get the recovery we had. It's incredible."

Dr Tobin said Muamba was given two defibrillator shocks on the pitch, one in the players' tunnel and a further 12 in the ambulance on the way to hospital but none worked.

The doctor said it was only when medics at London Chest Hospital took over that the situation began to sink in. He added: "I went into the corridor and cried.

"This is Fabrice, not someone who has gone down in the street. I know him, know his family, joke with him every day."

Tottenham club doctor Shabaaz Mughal was among those who rushed to Muamba's aid. He said: "He appeared to take a couple of gasps but was then unresponsive."

The pair were further helped by Dr Andrew Deaner, Consultant Cardiologist at London Chest Hospital, who was at the game as a fan, and ran on to the pitch to lend his expertise.

He said: "As soon as I saw them start CPR, something twitched in me. You always hope that, if you have a defibrillator and get there quickly, they will respond to at least two or three shocks. The longer the resuscitation, the less the chances of survival. But this is a very fit 23-year-old and those attending him are trained in CPR.

"If I was ever going to use the term miraculous it could be used here. He has made a remarkable recovery so far.

"Two hours after [regaining consciousness] I whispered in his ear, 'What's your name?' and he said, 'Fabrice Muamba'. I said, 'I hear you're a really good footballer' and he said, 'I try'. I had a tear in my eye."

The consultant added: "We don't want to get ahead of ourselves but, as things stand, his life is not in danger at this time.

"It is early days so it is not possible to say [if he will play again]."

"He has exceeded our expectations but this remains very early in what could be a very lengthy recovery period.

"The critical thing was the rapid, prompt and very effective CPR at White Hart Lane and expertise from the London ambulance service.

"Normal life is within the spectrum of possibility."