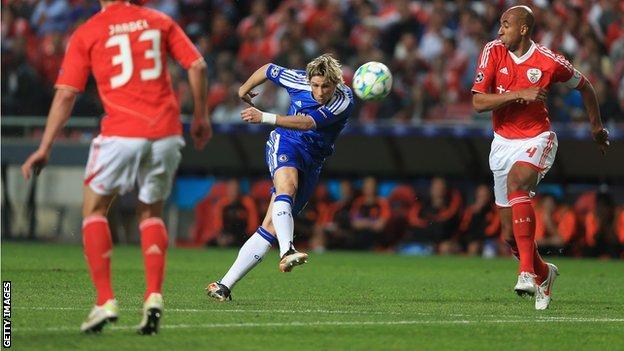 Salomon Kalou scored a late winner as Chelsea put one foot in the Champions League semi-finals after a first-leg quarter-final victory in Lisbon.

Forward Kalou had earlier wasted a fine chance, but made no mistake to side-foot home a cross from the impressive Fernando Torres.

Chelsea were full value for the victory, with Juan Mata denied by a post when the game was goalless.

Chelsea caretaker manager Roberto Di Matteo will know the job is only half done and will not be looking beyond the second leg at Stamford Bridge on 4 April.

"When Luiz gets it right, he really does have the raw material to be one of the best around. I've stuck by Torres all the way through. I still think he is a fantastic player. The fact that others cannot see the positions he runs into, that has been the problem."

But the Londoners will only have themselves to blame if they do not reach the semi-finals after a performance full of spirit, guts and determination in Portugal.

Di Matteo produced a major surprise before the game by naming Didier Drogba and Frank Lampard - who both started and scored in the impressive 4-1 win over Napoli two weeks ago - on the substitutes' bench.

Michael Essien was also on the bench as Di Matteo opted for a heavy reliance on players with Portuguese experience.

Paulo Ferreira filled the problem position of right-back - his first start of 2012 - while Raul Meireles was also recalled. In addition, former Benfica players David Luiz and Ramires both started against their old club.

Yet ex-Porto player Meireles, booed throughout by the home fans, found himself booked inside the opening 20 minutes for a cynical foul on Nicolas Gaitan, before Chelsea had a narrow escape after their defence was sliced open far too easily.

The hosts, currently third in their domestic league, carved out some decent openings but failed to hurt a Chelsea side that finished the first half strongly.

After Torres had engineered an opening when twisting and turning on the edge of the Benfica area, Meireles forced home keeper Artur into his first serious save with a powerful low effort just before the interval.

Chelsea had won only once away from home in Europe since October 2010 prior to this game - and that was at FC Copenhagen, who were in the midst of their winter break

While Cech had to be alert to keep out Cesar's long-range attempt, Chelsea's back four of Ferreira, Luiz, John Terry and Ashley Cole endured a comfortable first half compared to the opening 45 minutes in Italy against Napoli last month.

It was the calm before the storm.

The second-half was only a couple of minutes old when Cardozo dispatched a fierce volley towards the Chelsea net but, with Cech beaten, Luiz was in the right place to make a crucial clearance off the line and frustrate his former club.

Then Cech was forced to save smartly from Cesar before Chelsea spurned a glorious chance to score a priceless away goal.

With 53 minutes on the clock, the impressive Torres produced an inch-perfect cross for Kalou, who headed wastefully over in front of a gaping Benfica net.

Chelsea were clearly looking to establish a lead to take back to London.

Mata was denied by the woodwork after skipping round the keeper following a mistake by Jardel, who was then frustrated by an outstanding Cech save two minutes later in a free-flowing second half.

But with just 15 minutes left, Kalou struck from close range after connecting with a clever cross by Torres to earn his side a victory their hard work deserved.

There was a scare at the death when Ashley Cole almost scored an own goal, but Chelsea survived to ensure their season remains very much alive.