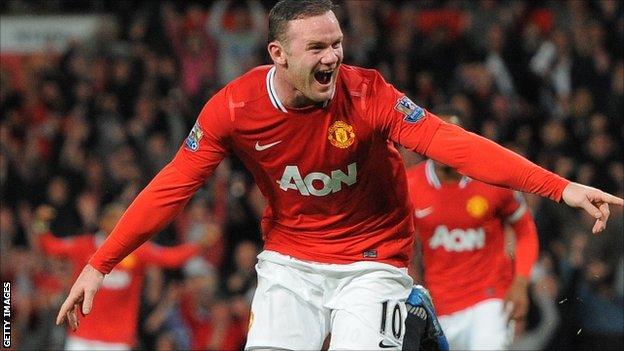 Wayne Rooney's 29th goal of the season helped Manchester United move back to the top of the Premier League, opening up a three-point gap over rivals City.

Rooney converted a Jonny Evans cut back just before the break to seal victory over a determined Fulham side.

And late on Fulham should have been awarded a penalty when Michael Carrick tripped Danny Murphy in the box.

The result means United take advantage of Manchester City's slip up against Stoke City on Saturday and with eight games to go are in pole position to retain their title.

United started the day level on points with their neighbours City, but with an inferior goal difference.

Manager Sir Alex Ferguson challenged his side to use their game in hand to pull away from Manchester City as well as reduce their goal-difference deficit, admitting it could be an "issue" at the end of the season.

And the opening 10 minutes suggested that United were likely to do both, with Ferguson's side dominating possession and controlling the game.

But United could only muster one decent chance with Ryan Giggs heading Rafael's cross straight at Schwarzer.

Fulham then came into the game with the visitors playing with more urgency and energy than United, who were unusually sloppy with their passing in front of a subdued atmosphere at Old Trafford.

Moussa Dembele and Mahamadou Diarra seemed to have the better of Carrick and Giggs in central midfield and Fulham attacker Clint Dempsey tested David de Gea from 20 yards.

But with the game heading for a turgid stalemate at the break, United sprang in to life to take the lead, much to the relief of the Old Trafford faithful.

It came from Rooney, who smashed home from close range following Evans' cut back after Fulham had failed to clear Young's whipped cross from the left.

United almost doubled their lead after the break with the lively Antonio Valencia latching on to Giggs' delightful ball over the top, but Schwarzer was equal to the Ecuadorian's strike.

Schwarzer was again called into action shortly after, tipping Young's right-footed curling effort from the left round the post.

But this was largely a flat display from United, who failed to take the opportunity to reduce the goal difference deficit - something that could come back to haunt them at the end of the season.

And in actual fact United were lucky not to concede a penalty in the 87th minute when Carrick clearly tripped substitute Murphy inside the box.

But referee Michael Oliver waved away their appeals and United hung on for a nervy victory.

The result means Fulham remain in 13th place but, having been humbled 5-0 by United earlier in the season, Cottagers boss Martin Jol will have been hugely encouraged by his side's display.