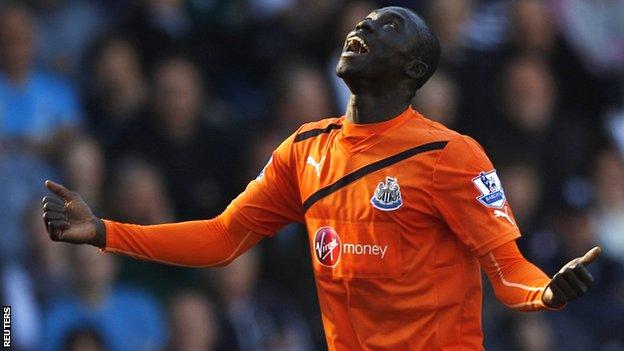 Newcastle produced an excellent attacking display to beat West Bromwich Albion at The Hawthorns and move level on points with fifth-placed Chelsea.

Hatem Ben Arfa crossed for Papiss Cisse to open the scoring with an easy finish from what appeared an offside position.

The superb Ben Arfa then curled in the second before again teeing up Cisse to drill past home goalkeeper Ben Foster.

A defensive mix-up let substitute Shane Long pull one back but Newcastle held on to maintain their push for Europe.

It has been a memorable season for the Magpies and, on this evidence, they remain capable of challenging for a top-four finish.

Key to their chances are the attacking trio of Ben Arfa, Cisse and Demba Ba - none of whom Albion could live with in the first half.

The Baggies are now without a win in three matches but remain 11 points clear of the relegation zone in 14th.

Just 14 of their 36 points this season have come at home and it was clear why as Newcastle were afforded too much time and space early on.

Ben Arfa and Yohan Cabaye were enjoying particular freedom, while Ba dragged defenders out of position to create gaps for Cisse.

Newcastle signalled their intent in the fourth minute when the Baggies failed to clear their lines and Ba's drive was tipped over the bar.

It was a vibrant start from the visitors and Albion, looking most unlike a team organised by Hodgson, soon fell behind.

Newcastle worked the ball left and Ben Arfa slid a low centre across the face of goal, where Cisse was waiting to convert from close range.

The home fans expressed frustration and their day took another turn for the worse when Newcastle struck a second on the counter-attack.

Fabricio Coloccini headed a clearance to Ben Arfa, who played a one-two with Cabaye and exchanged passes with Cisse before cutting in a firing past Foster.

Albion worked hard to muster a response, James Morrison drilling wide on the half-volley before Marc-Antoine Fortune headed over and Morrison had an effort disallowed for offside.

Their disappointment was compounded when Ben Arfa led another breakaway, combined with Ba and crossed for Cisse to sweep home.

In an attempt to redress the balance, Hodgson introduced Chris Brunt and Shane Long for Jerome Thomas and Keith Andrews at half-time.

The move sparked his side into life and, after Foster had made a crucial save when one-on-one with Cisse, Albion were given a fortuitous lifeline.

Peter Odemwingie chased a long pass over the top and confusion between keeper Tim Krul and centre-back Mike Williamson saw the pair collide and present Long with a tap-in.

Albion were suddenly in the ascendancy and Odemwingie tested Krul from a tight angle before Williamson blocked Fortune's fierce strike.

But Newcastle continued to carry a threat of their own and Foster made his latest save to deny Ben Arfa following a fine solo run.

Hodgson urged his men forward but, with all three substitutions used, Morrison suffered a foot injury and with him went the Baggies' chances.

at Newcastle on the final day of last season but there was to be no repeat this time round.