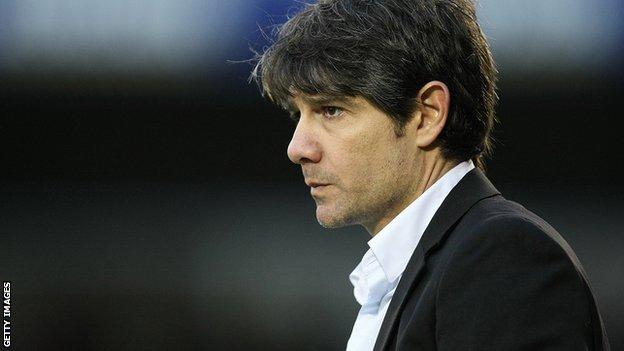 Albion are 17th in League Two, lost 4-1 against Torquay on Saturday and had not won a match since 26 December.

Peschisolido said: "I'm devastated with how things have gone recently but Burton Albion will remain close to my heart and I'm sure things will pick up.

"I've been delighted to have had the opportunity to manage this brilliant club with a great set of lads."

Immediately after the match against Torquay, Peschisolido spoke to the media and said: "I've had a chat with the chairman previously and he's still very supportive, so we'll go from here.

However, less than an hour later Burton announced Peschisolido had left the club.

At the start of 2012 Burton were in the play-offs but the loss against Torquay left them only eight points above the relegation zone.

Burton chairman Ben Robinson felt the club were left with no option and had to act.

"In all honesty, looking at how the team played [against Torquay], I think it's clear the time has come for a change.

"If we continue on our current run of form the teams below us will catch us up and we will find ourselves in a relegation battle.

"That would've been especially disappointing considering our wage budget is considerably higher than last season when we avoided relegation in the second to last game of the season.

"I've asked Gary Rowett and Kevin Poole to take charge of the team for Tuesday evening's game against Northampton.

"No one more than me wanted to see Paul succeed in this job. He's a lovely guy who has worked really hard and has always been a dedicated professional."