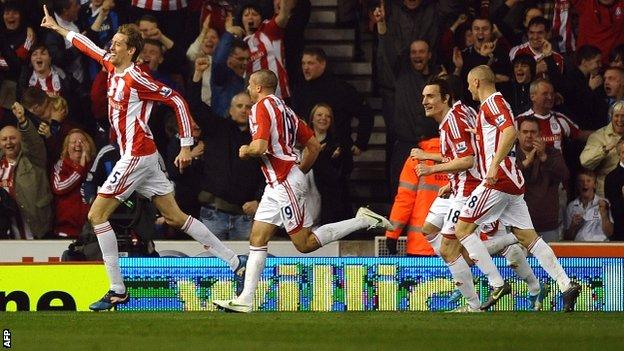 Manchester City salvaged a point at Stoke to move top of the Premier League on goal difference from Manchester United, who now have a game in hand.

After a forgettable first-half, Stoke went ahead when Peter Crouch hit an unstoppable dipping shot from 25 yards.

But the visitors drew level when Yaya Toure's 35-yard strike deflected into the corner off Ryan Shawcross.

City's title rivals United now have the chance to open a three-point advantage when they host Fulham on Monday.

Following some much publicised verbal sparring with United in midweek this was City's opportunity to put some pressure on their neighbours but they seldom looked like doing so and remain without a Premier League win at Stoke since the Potters were promoted four years ago.

The opening period was notable more for two controversial challenges than for chances.

Gareth Barry was fortunate to escape either a card or a penalty for a crunching high challenge on Glenn Whelan that the Stoke man did well to recover from, then David Silva was floored in an aerial challenge with Dean Whitehead and had to be bandaged before he could continue.

As expected, the visitors adopted the more patient approach and carved an excellent chance when Samir Nasri freed Gael Clichy on the left. His cross found Edin Dzeko, deputising for the injured Sergio Aguero, but he headed over when well-placed at the far post.

MAN CITY ON THE ROAD

Pablo Zabaleta also found himself in an excellent position in space at the far post but opted for a square ball rather than a shot on goal.

Indeed, shots were at a premium and the closest either side came to breaking the deadlock was Stoke's first corner five minutes before the interval.

The left-footed set-piece from the right curled over Joe Hart in the City goal but Zabaleta atoned for his earlier miss by hooking off the line.

Roberto Mancini's title-chasing side looked more purposeful in the second half and Asmir Begovic had more to do in the first two minutes than in the entire opening period, advancing off his line to block Dzeko before making a low save to deny Nasri.

But then came a moment of brilliance from Crouch, a strike that lit up the Britannia and had the vast majority of the crowd performing the famous "Poznan" jumping celebration favoured by the visiting supporters.

The ball did not touch the turf as Begovic launched a long kick downfield, Crouch got a touch to Jermaine Pennant, and the winger headed back to the gargantuan striker who flicked the ball up deftly and struck it sweetly over Hart into the top corner.

Tevez, who created more chances in his 24 minutes on the field during Wednesday's win over Chelsea than any other player on the field, replaced Barry midway through the half but could not achieve the same impact this time.

Even so, his team levelled with a spectacular effort of their own, as Toure's powerful strike flicked in off Shawcross, despite Begovic getting both hands to the shot.

Both Stoke substitute Wilson Palacios and Toure fired narrowly over with long-range efforts late on but it will be Manchester United who now feel they are in the driving seat as the focus switches to Old Trafford on Monday for the next instalment in the title race.

"I felt the attitude, application and commitment of the players was fantastic and we had the supporters who were again amazing.

"We thought the challenge from Barry was a definite penalty. We were very disappointed.

"Crouchy's goal was wonderful. He does it in training. Technically he's very good - he is made for us.

"We need him to have a summer's break but if he gets called up for England everyone in the Potteries will be delighted for him."