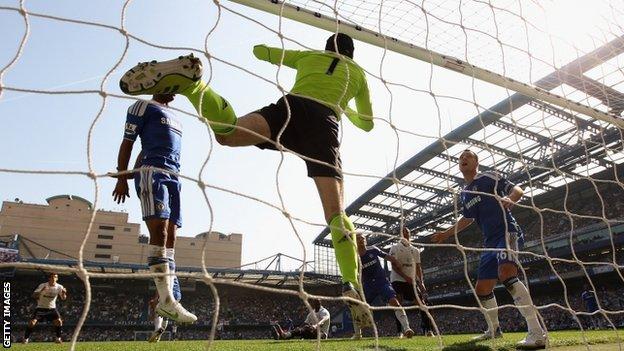 Tottenham maintained their five-point advantage over Chelsea after shading a poor draw at Stamford Bridge.

Harry Redknapp's side improved after the break and came close to a late winner when Gareth Bale headed against the crossbar.

Emmanuel Adebayor also had a shot cleared off the line by Gary Cahill.

Chelsea's Juan Mata had earlier struck a post with a free-kick but the home side face a difficult task to qualify for the Champions League next season.

Tottenham haven't won at Stamford Bridge since February 1990, when Gary Lineker and David Howells got the goals in a 2-1 victory.

Since interim boss Roberto di Matteo replaced Andre Villas-Boas earlier this month, the Blues have secured against the odds and

But their hopes of a top-four finish in the league look no brighter and here the hosts lacked any sort of attacking spark on a frustrating afternoon that saw both teams continually giving away possession.

Tottenham were not much better than Chelsea in a first half devoid of quality, but were stronger in the closing stages and showed enough to suggest they may have arrested their recent run of poor performances.

Despite Redknapp's of the idea that his side's form has anything to do with speculation linking him to the England job, there could be no denying that Tottenham's early season form had evaporated in the space of six short weeks.

They have still not won in the league since on 11 February, a run that has ended their outside chances of winning the title, but this point at least makes them favourites to end the season as Champions League qualifiers.

Redknapp's side crafted the solitary chance of a turgid first half in stoppage time when Luka Modric found space inside the penalty area to pick out Rafael van der Vaart.

The Dutchman's first shot was well saved by Petr Cech - making his 250th Premier League appearance - before Ashley Cole made a fine block to keep out the forward's second effort.

Modric has been marginalised for much of Tottenham's slump by being deployed wide on the left, but here the Croatian played through the middle from the start, with Bale looking a threat on the wing.

Chelsea posed a serious threat just once in the second half when Mata floated a delicate free-kick against the post, before replacement David Luiz inadvertently took the rebound away from the waiting Didier Drogba.

Adebayor could then have put Spurs ahead when he raced clear of the defence to round Cech, but the impressive Cahill recovered well to block his shot.

Bale lost Luiz at a corner to hit the bar and then saw a low free-kick turned around the post by Cech as Chelsea held on for a point.

Chelsea manager Roberto di Matteo: "We are disappointed but it's a fair result.

"Both teams had chances to win the game. Juan Mata hit a great free-kick against the post. Sometimes you need a bit of luck to unlock the win but we didn't get it.

"Defensively we were good but we had no edge going forward. It's a step back for finishing in the top four but we have eight games left and we will try to win them all."

Tottenham boss Harry Redknapp: "I thought we did enough to win the game. We edged it. We kept the ball great and we looked the more likely.

"Petr Cech has made a couple of great saves but he is top class. It's a good point but there is a long way to go and there will be twists and turns.

"It's wide open for the top four. Everyone is capable of winning six or seven in a row."