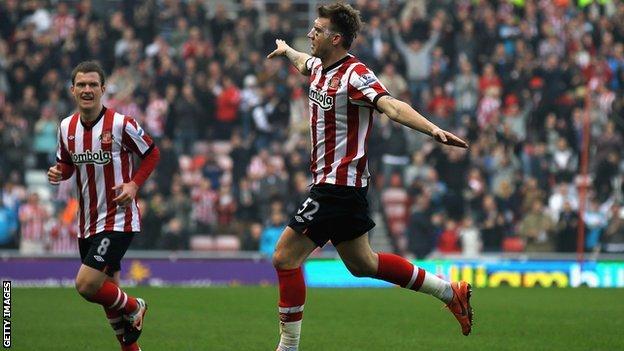 QPR's relegation troubles increased as James McClean inspired Sunderland to an easy win at the Stadium of Light.

The Londoners finished with 10 men after Djibril Cisse was sent off against his former club for an ugly challenge on Fraizer Campbell.

Stephane Sessegnon made it 3-0, Taye Taiwo scoring QPR's consolation from a 22-yard free-kick.

QPR manager Mark Hughes had shown his ruthless streak before the game by dropping captain Joey Barton, with ex-Sunderland defender Anton Ferdinand handed the armband on his first return to the Stadium of Light since leaving last August.

His team had scored three times in the final 13 minutes to beat Liverpool 3-2 in midweek and boost their chances of staying up.

But Hughes had warned that result would count for nothing if his side failed to perform at the Stadium of Light.

Sunderland, meanwhile, bounced back in style from the lacklustre 2-0 defeat at Blackburn in midweek, with Martin O'Neill's side better from start to finish.

Ray Wilkins was QPR manager when the Londoners last secured back-to-back wins in the Premier League in December 1995.

McClean by delivering a couple of early corners which caused panic in the QPR defence.

Bendtner was allowed to get his head on another McClean set-piece before Jack Colback, making his 100th senior appearance, flashed a volley narrowly wide as QPR quickly found themselves under pressure.

After stunning Liverpool, the Londoners struggled to seriously test Sunderland.

Striker Bobby Zamora's main first-half contribution was squaring up to Sotiros Kyrgiakos and then reacting as though he had been headbutted when he had not.

QPR had not managed to keep a clean sheet since beating Chelsea on 23 October and they again failed to shut out their opponents as Bendtner arrowed an unstoppable header past Paddy Kenny following a delicious cross from the impressive McClean four minutes before half-time.

Cisse went close to equalising, but Sunderland rarely looked troubled after he was given his marching orders with more than half an hour remaining.

The former Liverpool player could have few complaints after an ugly challenge on substitute Campbell.

McClean then doubled the lead with a low finish from an acute angle.

QPR were in tatters and fell further behind when David Vaughan delivered the perfect cross for Sessegnon to fire home at the far post.

Taiwo reduced the deficit with a superb free-kick, but there were no more late heroics.

"We made too many poor decisions. We didn't perform anything like to the same levels we did against Liverpool. If we're going to get out of this situation then we're going to have to play a lot better defensively than we did here."

"I'm delighted. There were some great individual performances and now we've got to 40 points we can set our sights a little bit higher. I thought James was absolutely outstanding. He deserves every signle penny [of his new contract]. He's got a great attitude."