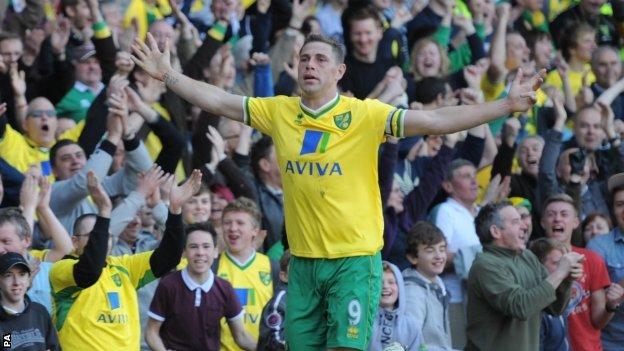 Bottom-side Wolves slumped to their fourth successive defeat as two goals from Grant Holt helped Norwich come from behind to secure victory.

The striker, later shown a second yellow card, scored the winner from the spot after Eggert Jonsson had handled.

Given how desperate they are for points, it was surprising Wolves showed so little sparkle in attack after the break.

Norwich looked more likely to score, with midfielder Wes Hoolahan a livewire. His cross almost resulted in a third for Holt, but not even the 6ft striker could reach far enough to divert the ball into the net.

Holt's day came to an premature end when he was shown a second yellow card for a late tackle on Kightly.

If the 30-year-old's dismissal soured his day, his performance had already helped lift the Canaries to a dreamy 11th place, while Wolves remain bottom and four points from safety.

The visitors had begun well enough, with Kightly in particular causing problems for Norwich with his runs down the right.

The winger's free-kick almost resulted in the opener - a floated delivery that was headed on target by Republic of Ireland striker Kevin Doyle, but pushed away by John Ruddy.

But his second deadly delivery into the area did result in a goal, Doyle inadvertently touching the cross into the path of Jarvis, who swept in.

Sadly for Wolves, their joy did not last long - 84 seconds to be exact.

Canadian Simeon Jackson poked the ball into the path of Holt and the powerfully built striker showed a delicate touch to dink the ball over Hennessey before finishing with his head.

And seconds before half-time, Wolves' frowns turned to looks of despair when Mark Clattenburg pointed to the spot after Hoolahan's drive struck the arm of Jonsson.

Holt smashed the spot-kick straight down the middle past the diving Hennessey.

Wolves brought on Sylvan Ebanks-Blake after the break but neither he nor his team-mates tested Ruddy, with Paul Lambert's men defending easily in the Norfolk sunshine.

"We're on 39 points which is an incredible stat. This season we've been excellent. Regarding whether I think we're safe, I never concede anything until mathematically we've done it. We're nearly there.

"It's a great testament to the team [to come from behind]. They keep going for you. It was a great finish by Grant for the first goal. It's never easy when the keeper is coming at that speed."

"I felt we were worth something from today's game. A point would have been a fair result. We got our noses in front and we should have kept the lead for longer. Regarding the penalty, I don't think it was an intentional handball.

"What we did just wasn't good enough. Having got in front, that's the bit you work hard for. To concede so early after scoring is crminal.

"Our position is not impossible. If we have eight more quality efforts then we won't be far short."