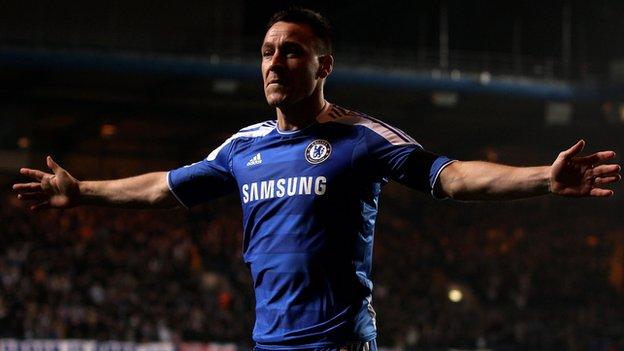 Chelsea have been drawn to face Benfica in the Champions League quarter-finals, playing away in the first leg.

If Chelsea triumph, they will meet the winners of the quarter-final between AC Milan and Barcelona with the first leg on home soil.

In the other last-eight ties, Apoel Nicosia play Real Madrid and Marseille take on Bayern Munich.

Chelsea chief executive Ron Gourlay told BBC Sport: "We are quite happy with the draw."

John Terry was still doing his bit to help us win that game when he wasn't on the field, which is fantastic.

He added: "We don't focus on the semi-finals. We have got to the quarter-finals and we wanted an away tie first."

The London club reached the quarter-finals with a thrilling victory over Napoli. Having lost the first leg 3-1, they completed a 4-1 home win in extra time to triumph.

Former manager Andre Villas-Boas was sacked by Chelsea a fortnight after the defeat in Naples, leading to Roberto Di Matteo taking charge on a caretaker basis.

Di Matteo said: "When you get down to the last eight teams, any draw is difficult. I've seen Benfica many times. They were in Man United's group. It's a tough game for us."

He refused to contemplate a potential semi-final against Barcelona, saying: "Are you writing off AC Milan straight away, as easy as that - the leaders of Serie A? Game by game - that's what I've learnt in my playing career and my coaching career."

Reflecting on the second-leg win against Napoli, Gourlay said: "It shows you the quality we've got in the football team that one or two people were doubting. They followed the brief of the coach and everything went well.

"When we asked guys to stand up, they stood up to be counted."

When asked about player power at the club, he responded: "It's certainly not the case. John Terry does orchestrate things on the field but, to be perfectly honest, we would encourage that. There is nothing wrong with that - it just shows the passion.

"He was still doing his bit to help us win that game when he wasn't on the field, which is fantastic. Didier Drogba, Petr Cech - they would have all done the same."

Discussing Villas-Boas's exit, he said: "It was a very difficult decision that the owner and board had to take. Andre brought many positives to the club - and we thank him for that - but that wasn't reflected in results and performances.

"We couldn't see that changing so we felt that we had to make the change. Time will tell and we'll see where we are at the end of the season.

"I don't think it was anything to do with the players. The players are very professional."

Benfica won Group C, which included Manchester United, and reached the last eight for the first time since 2006 by beating Zenit St Petersburg 4-3 on aggregate. The Portuguese side had lost 3-2 in Russia but won 2-0 in the return match on home soil.

The Portuguese club are currently second in their domestic league, a point behind Porto.

Chelsea have two former Benfica players in their squad - the Brazilians David Luiz and Ramires.