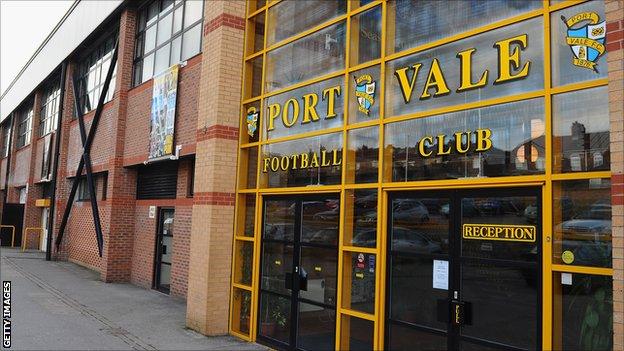 Staffordshire-based firm International Piping Products have confirmed they have had initial discussions with the troubled club's administrators.

It has also been confirmed that local businessman Mo Chaudry, who failed with a bid to buy Vale in 2011, is keen on investing in the League Two club.

Port Vale with debts of around £3m.

"What you find is, you think you're going well, then you get a setback, then things are going well again.

"What happens with a football club, you get 20 interested parties until you ask somebody to write a cheque, and then you end up with two.

"Everybody wants to own a football club. Whether they want to pay for the privilege is another matter.

"The ones that we're looking at are men of substance. They're not borrowing money to buy the club, they have their own money."

Meanwhile, Micky Adams has confirmed that he wants to stay as manager of Port Vale and has been assured of his short-term future.

However, he said his long-term future at Vale Park is "out of his hands".

"What people have to understand is the uncertainty of being a football manager while a club is in administration," said Adams, who returned to Vale at the start of the season after a short spell in charge of Sheffield United.

"The administrators have asked me to continue in the role that I'm doing and I'm happy to do so in the short-term, but I can't answer that question for the long-term.

"I've had two experiences where new people have come into football clubs [at Fulham and Brentford] and have decided that I'm not the manager to take them forward.

"That could happen again, so people should forgive me if I can't answer the question about my future. Somewhat, that will be taken out of my hands.

"I want to stay, I'm happy to stay, but my long-term future is out of my hands now and that will be down to other people."