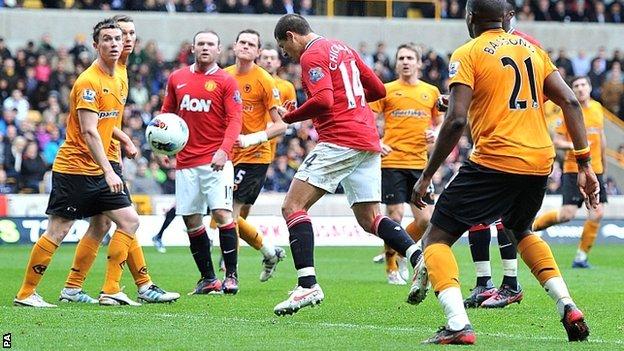 Manchester United extended their lead over Manchester City at the top of the Premier League to four points after demolishing a hapless Wolves.

That handed the impetus to the visitors with Antonio Valencia scoring on the break and Danny Welbeck tucking in.

Javier Hernandez then headed in and finished Valencia's cross with Steven Fletcher going closest for Wolves.

The Scotland striker's headers either side of half-time were all the hosts could muster in a game that might have proved a daunting enough challenge even before Zubar's dismissal left them a man short with more than half the match remaining.

Wolves have now won once in 14 league games and, having put Terry Connor in charge four games ago to try to lift them out of trouble, they now sit bottom of the table.

This was Connor's third defeat in four since taking charge and they have conceded 12 goals in their last three games without scoring.

For Sir Alex Ferguson's side, the emphatic scoreline had the additional benefit of reducing the goal difference between City and themselves to just three goals.

Last February, Wolves beat United at Molineux to end the visitors' long unbeaten start to the season, and Connor had spoken before the game of aiming to replicate that upset.

If that rallied the troops, the effect lasted only until Evans put Ferguson's side ahead, whereupon Wolves lost all momentum.

It was a poor goal to concede, Michael Carrick being given plenty of space at the back post from Wayne Rooney's corner to set up the Northern Ireland defender.

The hosts' plight was made worse when Zubar followed his booking for a lunge on Rooney on 28 minutes with another yellow card for a similar challenge on Welbeck 12 minutes later.

Ferguson had named Rooney, Welbeck and Hernandez in an attacking line-up and once Wolves were down a goal and a man, the visitors' attacking trio clearly sensed an excellent opportunity to get on the scoresheet.

Valencia's goal came from a Wolves corner, Rooney setting clear the Ecuadorian who, with no covering challenge, steered the ball into the corner after a break down the right.

And Wolves' fate was as good as sealed before half-time when Rooney switched the ball out to the right and Welbeck tucked in Valencia's cutback.

Any hope that United might take their foot of the gas in the second half soon disappeared when Hernandez headed in from close range from Rafael's clipped cross following a short corner.

And his finish after neat work from Valencia completed a miserable afternoon for the hosts.

Wolves did rally with Michael Kightly and Fletcher testing David de Gea, but on a straightforward afternoon for United the only surprise in the end was that leading scorer Rooney did not join the party.